Scientists have developed a method that allows cracks in composites to self-heal at temperatures as low as -60 degrees C.

The team, led by the University of Birmingham and Harbin Institute of Technology in China, said the method could be applied to fibre-reinforced materials used in situations where repair or replacement is challenging such as offshore wind turbines, or even in aircraft during flight. A paper describing the work has been published in Royal Society Open Science. 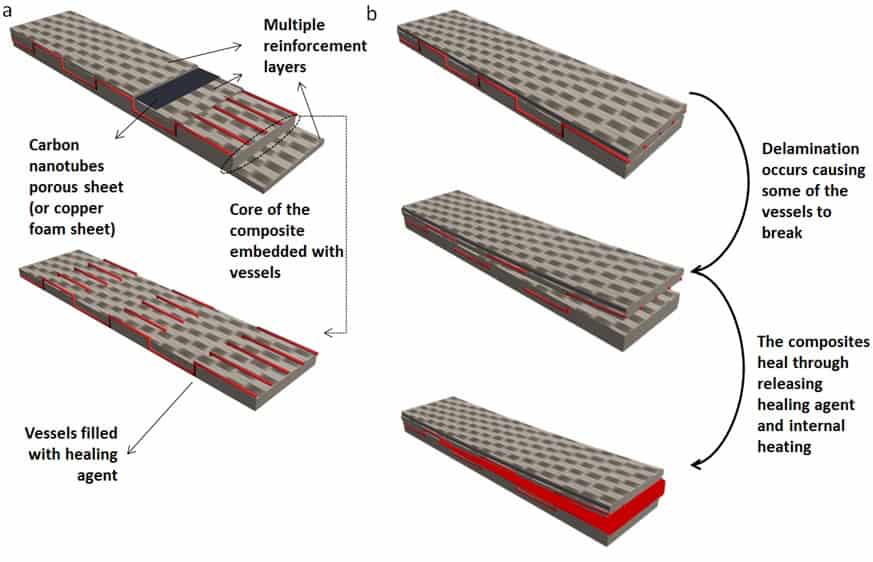 Under the right conditions self-healing composites have been shown to exhibit favourable properties. Previous research has yielded efficiencies above 100 per cent, indicating that the function of the healed material can be better than that prior to damage.

Until this paper, however, healing was deemed insufficient in conditions including very low temperature.

Key to self-healing at low temperatures is the way in which the new structural composite maintains its core temperature. To do this, three-dimensional hollow vessels (that deliver and release healing agents), and a porous conductive element (to provide internal heating and to defrost when necessary) are embedded in the composite.

Yongjing Wang, a PhD student at the University of Birmingham, said: "Both of the elements are essential. Without the heating element, the liquid would be frozen at -60°C and the chemical reaction cannot be triggered. Without the vessels, the healing liquid cannot be automatically delivered to the cracks."

A healing efficiency of over 100 per cent at temperatures of -60°C was reportedly obtained in a glass fibre-reinforced laminate, but the technique could be applied across a number of self-healing composites.

According to the university, tests were run using a copper foam sheet or a carbon nanotube sheet as the conductive layer. The latter was able to self-heal more effectively with an average recovery of 107.7 per cent in fracture energy and 96.22 per cent in peak load.

The healed fibre-reinforced composite would have higher interlaminar properties, and the higher those properties, the less likely that cracks will occur in the future.

"Fibre-reinforced composites are popular due to them being both strong and lightweight, ideal for aircraft or satellites, but the risk of internal micro-cracks can cause catastrophic failure,” Wang said in a statement. “These cracks are not only hard to detect, but also to repair, hence the need for the ability to self-heal."

The group will now look to eliminate the negative effects that heating elements have on peak load by using a more advanced heating layer. Their ultimate goal is to develop new healing mechanisms for more composites that can recover effectively regardless the size of faults in any condition.