A new thin-film coating developed at MIT can deliver controlled drug doses to specific targets in the body.

A new thin-film coating developed at MIT can deliver controlled drug doses to specific targets in the body following implantation, essentially serving as a 'micro pharmacy.'

The film could eventually be used to deliver drugs for cancer, epilepsy, diabetes and other diseases. It is among the first drug-delivery coatings that can be remotely activated by applying a small electric field.

'You can mete out what is needed, exactly when it's needed, in a systematic fashion,' said Paula Hammond, the MIT Bayer Professor of Chemical Engineering.

The film, which is typically about 150 nanometres thick, can be implanted in specific parts of the body.

The pigment, called Prussian Blue, sandwiches the drug molecules and holds them in place. Part of the reason the researchers chose to work with Prussian Blue is that the US Food and Drug Administration (FDA) has already found it safe for use in humans.

When an electrical potential is applied to the film, the Prussian Blue loses its negative charge, which causes the film to disintegrate, releasing the drugs. The amount of drug delivered and the timing of the dose can be precisely controlled by turning the voltage on and off.

The films can carry discrete packets of drugs that can be released separately, which could be especially beneficial for chemotherapy. The research team is now working on loading the films with different cancer drugs.

Eventually, devices could be designed that can automatically deliver drugs after sensing that they're needed. For example, they could release chemotherapy agents if a tumour starts to regrow, or deliver insulin if a diabetic patient has high blood sugar.

'You could eventually have a signalling system with biosensors coupled with the drug delivery component,' said Daniel Schmidt, a graduate student in chemical engineering at MIT.

Because the films are built layer by layer, it is easy to control their composition. They can be coated onto a surface of any size or shape, which offers more design flexibility than other drug-delivery devices that have to be microfabricated.

'The drawback to microfabricated devices is that it's hard to coat the drug over a large surface area or over an area that is not planar,' said MIT PhD recipient Kris Wood, now a postdoctoral associate at the Broad Institute of MIT and Harvard.

Another advantage to the films is that they are easy to mass-produce using a variety of techniques, said Prof Hammond. These thin-film systems can be directly applied or patterned onto 3D surfaces such as medical implants. 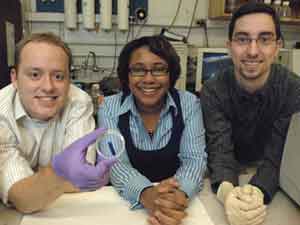