Fleets of driverless buses that offer a glimpse of future urban public transport have made their debut in Japan.

Visitors to the World Expo 2005, which opened on Friday in Aichi, are being transported around the enormous exhibition site by the buses which have been developed by engineers at Toyota. The so-called Intelligent Multimode Transit System (IMTS) uses some of Toyota’s latest Intelligent Transportation Systems (ITS) technology. This includes the use of high frequency radar to maintain a fixed distance between buses, and detect obstructions on the road ahead.

But while groups of the environmentally-friendly CNG (compressed natural gas) buses will operate in an unmanned ‘platoon’ formation on dedicated roads, they can also be operated manually on ordinary roads. Toyota claimed that this will make it possible to use the technology to link city centres with outlying regions without requiring passengers to switch buses.

Another big advantage of the system is that it doesn’t require tracks or overhead power lines. This, the company claimed, makes the construction and maintenance costs much lower than railway or tram systems. 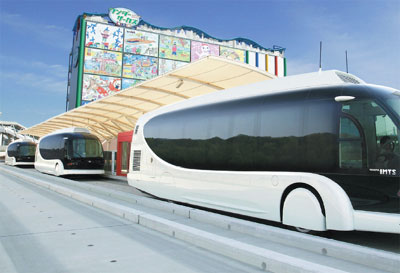 A Toyota spokesperson said that potential uses of IMTS include connecting airports and resort areas with neighbouring cities or residential neighbourhoods.

Visitors looking to complete the future-transport experience are also hopping aboard Japan’s first Maglev service, the Linimo, which is running to and from the exhibition site at Toyota City.

Elsewhere at the Expo, which is expected to attract 15 million visitors between now and late September, visitors are being treated to a vision of the future where urban walls of vegetation combat global warming, and plastics are biodegradable. Robots are also a strong theme at the show, with Toyota demonstrating two trumpet playing robots, which thanks to highly-advanced ‘artificial lip’ technology are able to treat visitors to a tune.