The STFC has been awarded a £800,000 contract to carry out environmental testing on a cryogenic harness for the James Webb Space Telescope.

The contract was awarded by the Staffordshire-based  Tekdata Interconnect Systems, which is manufacturing the harness for Northrop Grumman, the company developing the JWST.

The JWST will succeed the Hubble Space Telescope and carry a mirror seven times larger for greater light-collecting sensitivity. The telescope is a massive international collaboration between the European Space Agency (ESA), NASA and the Canadian Space Agency (CSA).

To gather new data describing the origins of light, galaxies, stars and life, the telescope will carry a number of imaging and spectrographic instruments, including a Mid-Infrared Instrument (MIRI) and a Near-Infrared Spectrograph (NIRSpec).

The instruments are cryogenically cooled to temperatures as low as 100 milliKelvin, and require superconducting wire interconnects to prevent thermal interference due to heat leak. To achieve the utmost accuracy in the near infrared and mid-infrared wavelengths, from 0.6µm to 5µm and 5µm to 27µm respectively, Tekdata is working with the European and US institutes to build flight cables for the NIRSpec and the test harness for the MIRI.

The test programme itself will be carried out at SSTD at the STFC Rutherford Appleton Laboratory (RAL) in Oxfordshire during 2009.

Using the Assembly, Integration and Verification Facility (AIV) at RAL, the harness will be put through vibration testing to ensure it will survive the violence of a rocket launch and thermal testing in which the harness is placed in a vacuum chamber and cycled through the extremes of temperature it will encounter both during launch and in its final orbit. By testing to slightly more extreme conditions than expected, SSTD will ensure that the harness will function correctly once in space.

Scientists from STFC are already involved with the JWST mission and are part of the international team developing the MIRI for the JWST. The verification model for MIRI was built and tested in a specially adapted test facility at RAL, while work to build the flight model spectrometer pre-optics at STFC’s UK Astronomy Technology Centre is now underway. 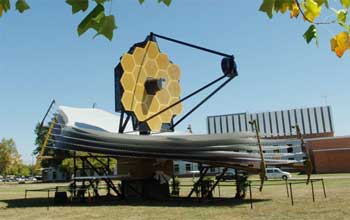 A full-scale model of the the James Webb Space Telescope was assembled on the lawn at the Goddard Space Flight Center and displayed between 19-25 September 2005. Once the real telescope launches in 2013, it will peer through dusty clouds to see stars forming planetary systems connecting the Milky Way to our own Solar System