An engineer at the Hong Kong University of Science and Technology has developed a helicopter that conducted an aerial scan of land affected by the recent Sichuan Earthquake.

An engineer at the Hong Kong University of Science and Technology has developed a helicopter that conducted an aerial scan of the land affected by the recent Sichuan Earthquake to help the authorities assess the damage there.

The helicopter, installed with a video camera, was linked to the Global Positioning System (GPS) and flew on its own on a preset course.

The helicopter was deployed in Sichuan on 15 May, only three days after the earthquake hit the province, and in the following nine days, it took aerial photos of 12 affected cities, towns and counties.

Wang Tao, the student who developed the helicopter, said: 'The aerial scanning provides immense help to rescue and recovery operations. It helps the working teams to assess the damage, set priorities, and helped authorities to chart a course of action.

'There are numerous benefits in using an unmanned automated helicopter to take aerial photos of disaster sites. First, it is fast, as the helicopter can reach the required location within minutes. Second, it is safe, because there is no need for people to travel over disaster-stricken routes which are often treacherous. Third, it is much cheaper than flying real helicopters to carry out reconnaissance.' 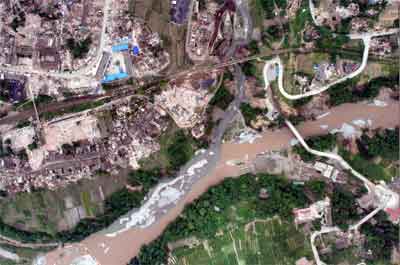 For their part, UK researchers are also examining how helicopters might be used for such tasks. This month, a multi-disciplinary team announced that it would be developing semi-autonomous robotic helicopters for search and rescue operations.

To help with the development, the researchers - from University College London, Oxford University and Ulster University - were awarded a £2m grant under the government's WINES III (Wireless Intelligent Networked Systems) research programme for the project, which runs until 2012.

Unlike the Chinese effort, though, the UK engineers promise to deliver a swarm of interacting robot helicopters that could work in groups of three or four to accomplish their missions.