Researchers at the National Institute of Standards have demonstrated that a novel class of materials could enable a practical hydrogen fuel tank.

One of the key engineering challenges to building a clean, efficient, hydrogen-powered car is how to design the fuel tank. Storing enough raw hydrogen for a reasonable driving range would require either impractically high pressures for gaseous hydrogen or extremely low temperatures for liquid hydrogen.

Now, researchers at the National Institute of Standards and Technology’s Center for Neutron Research (NCNR) have demonstrated that a novel class of materials could enable a practical hydrogen fuel tank.

A research team from NIST, the University of Maryland and the California Institute of Technology studied metal-organic frameworks (MOFs). One of several classes of materials that can bind and release hydrogen under the right conditions, they have some distinct advantages over competitors. Specifically, MOFs don’t require the high temperatures (110 to 500 C) some other materials need to release hydrogen.

In particular, the team examined MOF-74, a porous crystalline powder developed at the University of California at Los Angeles. MOF-74 resembles a series of tightly packed straws comprised of mostly carbon atoms with columns of zinc ions running down the inside walls. A gram of the substance has roughly the same surface area as two basketball courts.

The researchers used neutron scattering and gas adsorption techniques to determine that at 77 K (-196 C), MOF-74 can adsorb more hydrogen than any unpressurised framework structure studied to date - packing the molecules in more densely than they would be if frozen in a block.

Although the liquid-nitrogen temperature of MOF-74 is not exactly temperate, it’s easier to reach than the temperature of solid hydrogen (-269 C), and one of the goals of the research is to achieve energy densities great enough to be as economical as petrol at ambient, and thus less costly, temperatures.

MOF-74 is a step forward in terms of understanding energy density, but there are other factors left to be dealt with that, once addressed, could further increase the temperature at which the fuel can be stored. Fully understanding the physics of the interaction might allow scientists to develop means for removing refrigeration or insulation, both of which are costly in terms of fuel economy, fuel production, or both.

The work was funded in part through the Department of Energy's Hydrogen Sorption Center of Excellence. 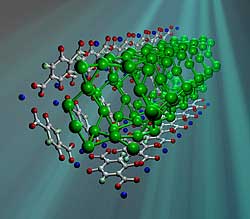 MOF-74 resembles a series of tightly packed straws comprised mostly of carbon atoms (white balls) with columns of zinc ions (blue balls) running down the walls. Heavy hydrogen molecules (green balls) adsorbed in MOF-74 pack into the tubes more densely than they would in solid form