A University of Michigan engineer has developed a machine that can generate power from slow moving water.

A University of Michigan professor has developed a machine that can generate power from slow moving water.

The so-called VIVACE machine (Vortex Induced Vibrations for Aquatic Clean Energy) could, it’s claimed, harness energy from most of the water currents around the globe because it works in water flows moving slower than two knots.

A working prototype of the machine, developed by Michael Bernitsas, a professor in the University of Michigan Department of Naval Architecture and Marine Engineering, comprises just one sleek cylinder attached to springs that hangs in a tractor-trailer-sized water-filled tank across the direction of the water flow.

Just a few cylinders may be enough to power an anchored ship, or a lighthouse. An array of VIVACE converters the size of a running track and about two stories high could power about 100,000 houses. Such an array could rest on a river bed or it could dangle, suspended in the water under the surface.

Because the oscillations of the VIVACE machine would be slow, the system would have no effect on marine life.

Bernitsas and his team of researchers recently completed a feasibility study that found the device could draw power from the Detroit River. They are working to deploy one for a pilot project there within the next 18 months. 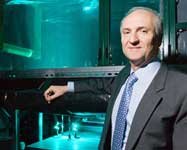 A video of Prof Bernitsas explaining how the VIVACE works can be seen at: http://www.ns.umich.edu/podcast/video.php?id=499

US firm Vortex Hydro to scale up innovative hydro concept