Cambridge Consultants is developing a portable instrument that has the potential to revolutionise the way certain drug delivery devices are tested.

The new device can mirror the performance and level of data provided by current laboratory laser diffraction measurement machines, for an estimated one-hundredth of the cost.

The device itself measures the droplet size distribution in an airstream, a technique used in testing respiratory drug delivery devices.

Airborne drug delivery for deep-lung treatment relies on generating particles of a very specific size - too large and the drug never reaches the deep lung, too small and the drug is exhaled and is similarly ineffective.

By applying its expertise in optical systems, electronic signal processing and advanced capabilities in the Mie scattering mathematical theory - a critical element of this form of droplet analysis - Cambridge Consultants has started developing a test unit which could be manufactured in volume for just a few hundred pounds - less than one-hundredth of the cost of a full laboratory laser diffraction installation.

It is also small enough to be portable, so it would be suitable for clinical drug delivery trials, where it is critical to establish how much drug reaches the patient’s deep lung so that doses can be accurately compared to the patient’s response. It would also be useful during end-of-line production testing of drug delivery devices. 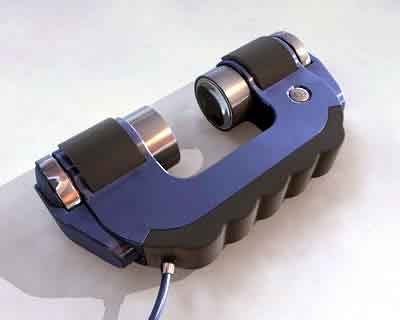 The Cambridge Consultants device is designed to be simple enough to potentially be operated by semi-skilled clinicians to produce highly accurate plots that indicate the number of droplets within a pre-selected range of sizes.

'We’re now looking for partners with whom to further develop this technology. The most immediate opportunity for it is within the pharmaceutical market, but there are other potential applications for our design in other aerosol products,' said Dr Robert Jones, Senior Consultant at Cambridge Consultants.