The Federal German Printing Office, or Bundesdruckerei, has developed a method to personalise security cards made with Bayer’s Makrofol with a photo and signature of the holder.

The Federal German Printing Office (Bundesdruckerei) has developed a method to personalise security cards using Bayer’s Makrofol with a photo and signature of the holder.

The new process allows the colour image to actually be created inside the card where it cannot be altered without destroying its laminated film structure.

As a result, cards produced using the process - such as ID cards and passports - are particularly difficult to counterfeit. Until now, it has only been possible to apply black-and-white images to the inside of polycarbonate cards using laser engraving.

In the new Innosec Fusion process, coloured inks are first applied to a polycarbonate film. As the inks are also based on polycarbonate, a strong bond is created between the print image and the surface of the film. The core film is then laminated with overlays without the use of adhesive.

The individual layers of film thus form what, to all intents and purposes, is a single piece of polycarbonate. The layers cannot be separated from one another without destroying the entire card. This means that counterfeiters are unable to access the inner layer where the information is stored.

’As an added bonus, the new technology can also be combined with laser engraving. This adds an extra dimension of protection against counterfeiting,’ said Bayer MaterialScience’s Cengiz Yesildag.

The mechanical and thermal properties of the polycarbonate films used ensure the cards have good resistance to general wear and tear.

’In particular, they remain very tough even when exposed to low temperatures and have excellent stiffness. This means the cards have very good long-term flexural strength and return to their original form even after being repeatedly bent severely out of shape,’ added Bayer MaterialScience’s Dirk Pophusen.

Chips and antennae - such as those used for contact-free ID cards - can also be integrated into the film structure and cannot be removed without damage. 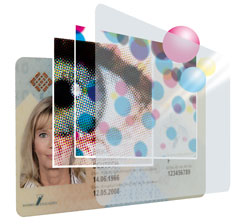 Inside information for endoscopy

A look inside the Dounreay Fast Reactor