It folds, it walks, it swims, it dissolves: the self-building mini-robot

This week’s video shows how a sheet can self-fold into a functional 3D robot, actuate immediately for untethered walking and swimming, and then dissolve in liquid.

In use, the robot could be used in medical applications but making one as agile – and disposable - as this one has proved challenging.

According to its developers from MIT and TU Munich, the sheet weighs 0.31g, spans 1.7cm square in size, features a cubic neodymium magnet, and can be thermally activated to self-fold. They add that since the robot has asymmetric body balance along the sagittal axis, the robot can walk at a speed of 3.8 body-length/s being remotely controlled by an alternating external magnetic field.

Developed models include an acetone-degradable version, which allows the entire robot’s body to vanish in a liquid. 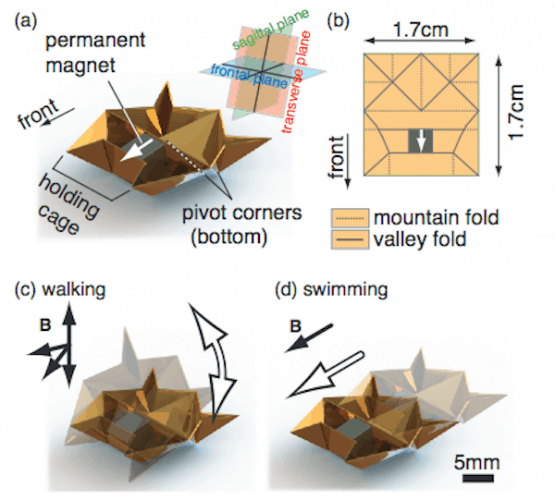