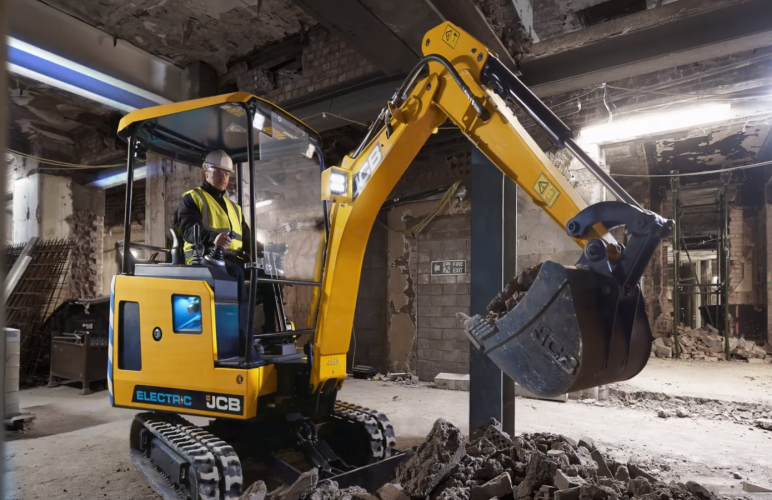 The presentation was made at the RAC’s Pall Mall clubhouse, where JCB’s director of advanced engineering Bob Womersley gave a detailed briefing on the digger to assembled media. Known as the JCB 19C-IE, more than 200 units have already been sold. Womersley was able to point to a number of use cases where the vehicle’s unique characteristics have delivered significant benefits to customers, including in a Parisian cemetery and inside a food factory.

Digging up the future with JCB

“Of course, electrification gives you zero emissions at point of use,” he said. “There’s no fumes, there’s no diesel extraction required, which is crucial for indoor excavation.”

JCB also claims that the noise in the cabin is reduced by 10 decibels compared to the diesel version. This not only benefits the operator, it also significantly reduces the noise impact of the vehicle on its surroundings, meaning it can be deployed in situations that other diggers couldn’t.

“Lower noise makes it perfect for urban environments,” said Womersley, “whether it’s utility work in the city, or outside schools or hospitals.”

The digger comes in just under two tonnes at 1862kg. It has a peak power delivery of 20kW and its li-ion battery pack is rated at 14.8kWh. According to JCB, this is enough for a ‘full day’s shift’, though exactly how many hours that equates to is dependent on the use profile. The battery packs are manufactured by Sunderland’s Hyperdrive, which has been working in partnership with Nissan for several years in the region.

“It had to be robust, so we’ve worked hard on validating the battery in the machine,” said Womersley.

“There’s no suspension on these machines, so the vibration characteristic that the whole of the propulsion system has got to withstand is substantial.”

The electric digger has an operational temperature range of -20 to +45 degrees Celsius, making it suitable for deployment in almost any construction environment around the world, according to JCB.

“We’ve got machines in California and across the whole of the States, we’ve got them in northern Europe, in the Middle East,” said Womersley. “The market response has probably surprised us. Sales today have topped 200 in quite a short time. That’s quite a lot of mini excavators. I know it’s not a lot of passenger cars but it is a lot of mini excavators!”