IBM is licensing the mouse adapter to Montrose Secam Limited, a small British electronics company, which is manufacturing and selling the Assistive Mouse Adapter for under $100.

According to the International Essential Tremor Foundation (IETF), nearly 10 million people in the United States alone are affected by Essential Tremor, the most common form of hand tremors. The involuntary movements of the hand when using a computer mouse make it extremely difficult to operate a PC. Simple tasks like opening an email or navigating the web are made almost impossible because of the erratic movements of the cursor on the screen. 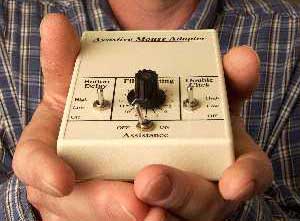 The new mouse adapter filters out the shaking movements of the hand – in a similar way to how the image stabilizing systems in some cameras eliminate hand motion. The device is designed to work with any PC and no additional software is required to use it – a mouse adapter is simply plugged in between the computer and the mouse and can be switched on or off, and adjusted depending on the tremor severity. It can also be set to filter out unintended multiple clicking on the mouse caused by a shaking finger.

Montrose Secam plans to donate a percentage of sales from the adapter to local tremor foundations who offer support and advice to sufferers of tremor conditions.

The Assistive Mouse Adapter is available today and can be purchased through Montrose Secam’s website: http://www.montrosesecam.com/index1.html