Sterling Heights, Michigan-based Key Safety Systems (KSS) has developed what it claims is the first ever production-ready inflatable seatbelt.

The Ford-KSS patent-pending technology will debut on the next-generation Ford Explorer, which goes into production in 2010.

After receiving a deployment signal from the vehicle's crash-sensing system, the company's Cold Gas Inflator (CGI) fills the inflatable seatbelt with cold gas.

The fully inflated belt is approximately five times wider than a standard seatbelt, which reduces injury by distributing crash-force energy across more of the occupant’s body.

'In addition to helping to reduce injury levels, the product has a smooth, round edge that we believe to be more comfortable to wear than a standard seatbelt,' said Ron Feldeisen, senior vice president of global sales and marketing at KSS. 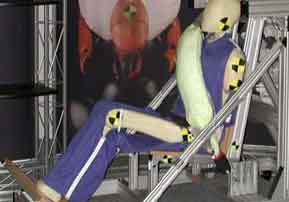