A lightweight laser-based communication and tracking system being developed in the UK could allow aircraft and satellites to transmit information to the ground more quickly and securely.

The Hyperion system, which uses eye-safe lasers with a wavelength of 1,550nm, is being developed by researchers at Oxford University and Airbus Group with funding from EPSRC and Innovate UK.

With the rise in the use of UAVs for surveillance and disaster monitoring, and the increasing amount of data being produced by on-board sensors on modern aircraft, there is a growing need for a more lightweight method of transmitting this information back to the ground, according to Prof Dominic O’Brien, who led the Oxford team.

Existing point-to-point radio frequency communication systems for aircraft tend to be quite heavy, limiting the length of time for which smaller UAVs can fly, he said.

The Hyperion system consists of a ground unit that aims a laser beam up to the aircraft, where it is captured by a lightweight retroreflector.

A shutter on top of this retroreflector is turned on and off to modulate the beam, encoding it with the data to be transmitted. The device then reflects the beam back to the ground unit for decoding.

“Putting the retroreflector on the UAV allows you to have a very lightweight terminal, and that technology is very well suited to optical [communications],” said O’Brien.

The system uses a less crowded part of the electromagnetic spectrum than existing RF communication, and is also less vulnerable to interception and jamming, he said. That is because the system uses a very narrow beam of light, which would be virtually impossible to spot. 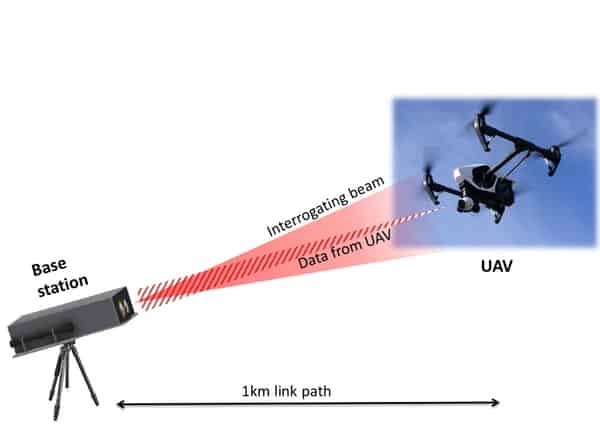 The technology also eliminates the need for a separate tracking system on the UAV, said O’Brien. “You have this beam pointing at the UAV, and the aircraft does not need a means to point it back to you, that is done automatically [by the retroreflector],” he said.

The technology could allow UAVs to transmit images to search and rescue teams more quickly, for example, or speed-up aircraft maintenance by sending sensor data down to ground crews before landing. It could also be used by microsatellites in low Earth orbit.

The system has been tested successfully in-flight, and has a range of 1km. The research team are now working to extend this range, and hope the system could be commercialised within three-to-five years.