Will the spread of car hailing services and apps along with development of autonomous vehicles trigger a long-mooted decline in personal car ownership?

Last week we asked if personal vehicle ownership is set to decline, a question predicated by Toyota’s £500m investment into self-driving cars for Uber’s car-sharing network.

The agreement will see the initial development of a so-called Autono-MaaS (autonomous-mobility as a service) fleet based on the Toyota Sienna minivan, where Uber’s Autonomous Driving System and the Toyota Guardian automated safety support system will both be integrated into the Autono-MaaS vehicles.

At first glance, the deal appeared to lend credence to the belief that OEMs are preparing to adjust their business models to focus more on fleets rather than individual car buyers.

Commenting on the deal, Shigeki Tomoyama, executive vice president of Toyota Motor Company and president of Toyota Connected Company said: “This agreement and investment marks an important milestone in our transformation to a mobility company as we help provide a path for safe and secure expansion of mobility services like ride-sharing that includes Toyota vehicles and technologies.”

Toyota aren’t the first automotive OEM to use the sort of language that would indicate a shift in strategy, and companies such as Jaguar Land Rover also have a relationship with a ride-sharing service, Google spin-off Waymo. In Germany, Daimler has partnered with Bosch to develop an autonomous ride-hailing service.

On top of initial cost, car ownership comes with added headaches. The vehicle must be maintained while depreciating in value. Then, depending on where you live, there are added extras such as home-borough and borough-to-borough parking restrictions, plus charges for driving in certain inner-city zones. Why own a car – whatever the deal – when it is seemingly easier to use an app to hail a vehicle? 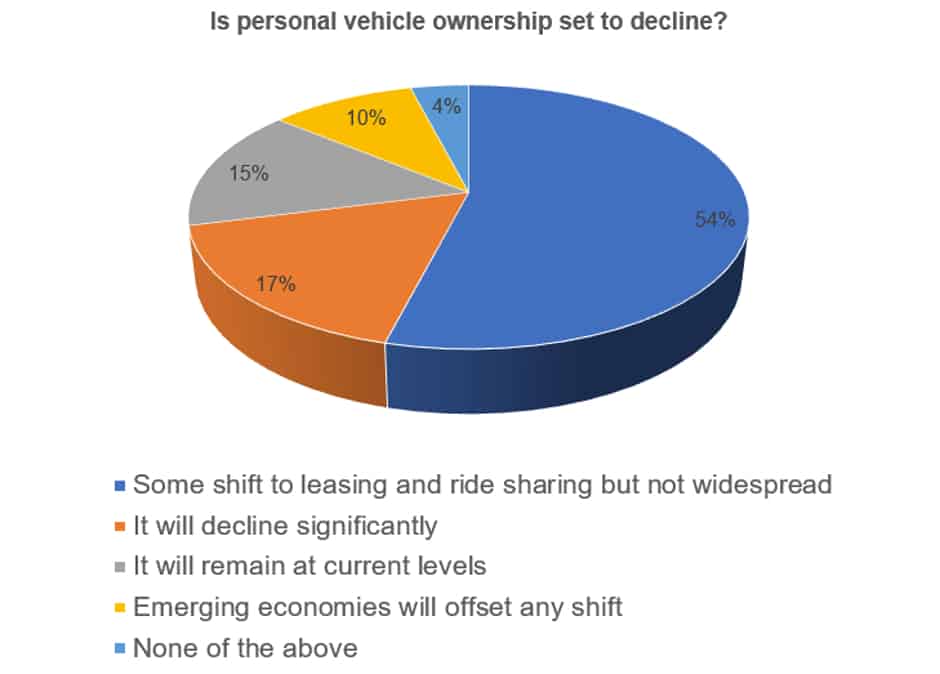 According to 54 per cent of the 655 Engineer readers that took the poll, there will be a shift to leasing and ride sharing, but it won’t be widespread.

A further 17 per cent of respondents said personal vehicle ownership will decline significantly, closely followed by 15 per cent who agreed that it will remain at current levels. Of the remaining 14 per cent, 10 per cent said that emerging economies will offset any shift, and four per cent opted for none of the above.

There is currently a Town-v-Country debate taking place in Comments, where some readers are doubting the viability of mobility solutions - both current and proposed – in the sticks.

Malcom wrote in to say: “Personally, I don’t see personal car ownership declining for folk (like me) who need to get to see relatives that live 100+ miles away in the middle of the country that get one or two buses a week.”

A certain andyg added: “I’m struggling to see how the economics of locating an autonomous hailable fleet within a reasonable distance (say 20mins) of each inhabitant in a dispersed population - with enough vehicles to provide a service at peak times, and balancing the frequency (usage rate) against costs and providing that transport at a reasonable price - could work.”

On the question of ownership, reader Dan Taylor has leased, and is likely to continue leasing, a vehicle. “Currently owners use their car on average 1hr per day – it’s a waste of money and resources,” said Dan, who added in another post: “Driving is only fun about twice a month. The rest is a grind and a danger to life.”

“If the self-drive car-hailing future is cheap enough and reliable enough then those who would rather not drive will make the switch,” said Ian. “I don’t think this is any time soon though, not even with the rate of change we are seeing now.”

The debate on car ownership can – and will – take different trajectories simply because the variables are numerous and need addressing.

The last word, however, comes from a 2017 survey by McKinsey, which found that in the US alone, 67 per cent of all respondents prefer driving their own cars over using ride-hailing apps, and 63 per cent aren’t interested in trading their vehicles for shared-mobility rides -even if they’re free. More from McKinsey’s report - ‘How shared mobility will change the automotive industry’ - can be found here.