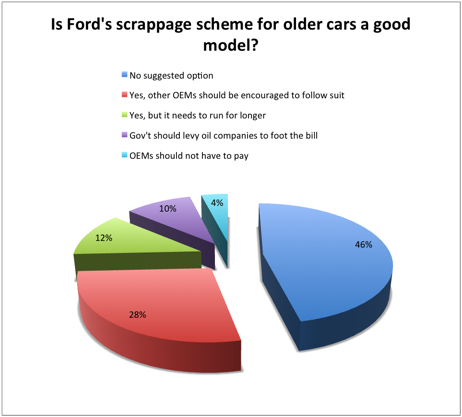 Last week's poll received a strong response, with 452 readers contributing to the result. This, however, was a surprise, with the largest group of respondents, 47 per cent, rejecting our suggested options and selecting "None of the Above".

This is a relatively rare event and usually indicates that we missed an obvious option off our suggestions. We can't, of course, determine what the bulk of the 212 readers who picked this option thought. However, among the 31 people who left us comments, there was a strong agreement that discounting a new car by £2000 in return for scrapping an old model was more a marketing move than environmentally-friendly policy.

“If you buy a new car you lose 20 per cent just by driving it off the forecourt (VAT element) which for an average £30k new car is £6K so a £2k scrappage scheme doesn’t even cover the VAT on a new car,” said Peter Thomas, with other comments agreeing with this sentiment.

Some commenters argued with the 9-year cut-off date for the scrappage, saying that it makes more environmental sense to keep older cars that still pass MOT tests running than to scrap them, and that lifecycle environmental performance needs to be taken into account. “Scrapping a perfectly good diesel car is far worse for the environment than keeping it running well,” commented Tim Preston.

Of the readers who did choose suggested options, the largest group, 28 per cent, thought the Ford scheme was a good idea that other manufacturers should be encouraged to copy. The next group, 12 per cent, liked the Ford scheme but thought it needed to run for longer than three months; 10 per cent thought the government should levy oil companies to foot the bill for scrappage schemes, and 4 per cent thought that manufacturers should not have to pay for scrappage.

Please continue to send us your opinions on this topic.