Long running concerns over Huawei involvement in the UK’s 5G network have been reignited by claims from the US government that any such arrangement would impact intelligence sharing. 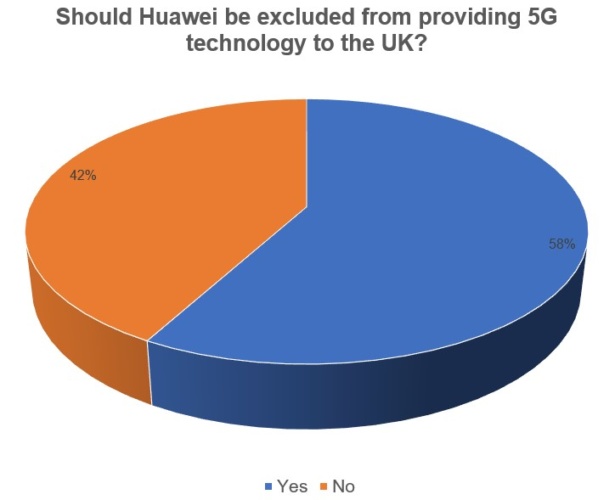 The controversy and kerfuffle surrounding Huawei shows little sign of abating, with its CFO battling extradition to the US, which is urging the UK to reject the company’s 5G technology.

Meng Wanzhou, Huawei’s chief financial officer, faces charges that include alleged violation of sanctions against Iran. A Canadian court will decide if she’s extradited to the US, which has raised concerns about Chinese intelligence services using Huawei’s 5G technology as a so-called ‘back door’ to conduct operations in cyberspace.

UK intelligence services have advised the government that the firm’s involvement in “non-core” elements of the system would not present a security risk. This isn’t the view of Matt Pottinger, Donald Trump’s deputy national security, who is widely reported as saying it would be ‘nothing short of madness’ to use Huawei’s technology in the UK’s 5G network.

All of this prompted us to ask if Huawei should be excluded from providing 5G technology to the UK, and 58 per cent of the 574 respondents agreed that it should. Two poll responses were offered as options, and the remaining 42 per cent saw no issue with Huawei’s 5G involvement in Britain.

“This is a critical element of social infrastructure and we need to be in control of all of it,” said Nick Cole. “The risk of external interference is far too high, and the consequences are far more immediate than the risks arising from normal hot warfare. As we see on a continual basis the ease with which systems are brought to a halt is extremely worrying and, in most cases, nowadays, we rarely have the luxury of viable manual fall backs.”

Al De La Ha added: “All software/hardware has back doors/weaknesses to some degree, can`t shake the feeling that this is more about the dollar than anything else. Apple & Microsoft have enjoyed domination of these markets for decades but recently have been knocked off their perch by the likes of Samsung & Huawei, the latter being way ahead with the development & roll out of 5G.”

Echoing this view, Another Steve said: “This whole issue is totally political and nothing to do with security and everything to do with US hegemonic interests. I have every confidence that our IT industry is more than capable of detecting and managing security infractions, and the bottom line must be that we have free and unfettered access to the best products and technology, wherever it comes from.”

What do you think? The debate remains active in Comments below, but be aware that comments are moderated, and any comments not meeting our guidelines will not be published.