What is the most appropriate way to talk about the situation with the Earth’s climate? 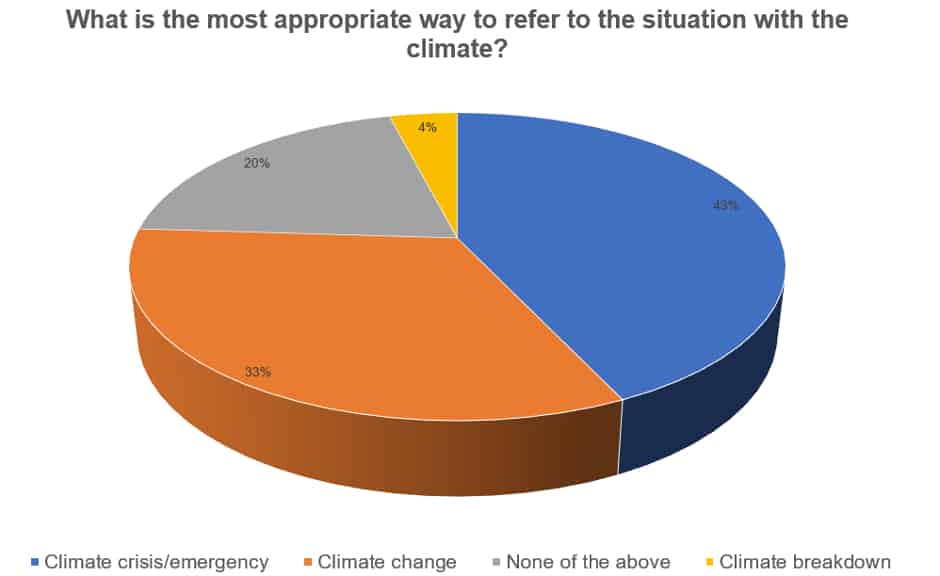 Recently, Guardian editor Katherine Viner sent a memo to the paper's journalists setting out how it was going to change the language it used to talk about the climate. This, she explained, was to press home the magnitude of the challenge that changes to our climate pose, and how seriously the issue should be taken by readers and policymakers. We asked The Engineer's readers what they thought of Viner's recommendations.

A third (33 per cent) felt that the prevailing term of 'climate change' was sufficient, despite Viner's belief that this phrase "sounds rather passive and gentle when what scientists are talking about is a catastrophe for humanity”. From now on The Guardian will be using terminology such as 'climate emergency', 'climate crisis' or 'climate breakdown'. Some variation on the first two of these (crisis/emergency) was the most popular choice in our poll, garnering 43 per cent of the vote. 'Climate breakdown' was significantly less popular, backed by just four per cent. One-fifth of respondents (20 per cent) chose the 'none of the above' option, a larger proportion than usual for our polls, which is likely to have included some who dispute the veracity of the prevailing scientific consensus on the climate.

"There is a need to get back to language that makes the problem understandable," commented reader R Brookes. "The original term was 'Global warming' but hard lobbying by the fossil fuel companies changed it to the more mundane and less threatening 'Climate change'. As a consequence needed action has been delayed. Also too many people do not know the difference between weather and climate and even the TV weather forecasters tells us how marvellous it is when it is 22°C in February."

Others, however, disagreed with the Guardian's diktat, feeling that the new language would be used to simply reinforce opinion rather than scientific fact.

"The language used does not change the facts, it simply spins the story to the writer’s opinion – and we should all beware of spin," wrote 20 Cent.

Another Steve also felt language was somewhat irrelevant, but for different reasons.

"Does it really matter what we call the mess we’ve created? The bottom line is what are we doing about it? and the answer appears to be, nothing. Those in power seem to have lost the plot, if they ever knew or cared what the plot was."

The discussion, which is moderated, will be allowed to continue below. We remind all readers to familiarise themselves with our guidelines for the content of comments before submitting.