Readers of The Engineer are split between backing subsidies for onshore wind and leaving the sector to fend for itself in the open market.

Our poll last week attracted 414 responses, but the result was inconclusive with no clear majority view emerging. The largest group of respondees, 40 per cent, concluded that onshore wind was doing fine without government help (subsidies were withdrawn in 2016), but the next largest, 32 per cent, called for the restoration of subsidies.

Considering the level of hostility we often see to onshore wind, the proportion of respondents calling for an immediate end to development of onshore wind was surprisingly small, at 21 per cent. A further seven per cent declined to pick an option.

The discussion section was quite restrained in comparison to recent weeks, with 19 comments. Many of these compared the level of subsidy for "green" generation with that for nuclear (which is also, of course, classified as low carbon, although few if any would call it renewable).

"For environmental and consumer interests, cheap clean and renewables is the only way forward. Onshore windfarms are far less intrusive than a nuclear station, fracking site and the toxic waste disposal sites that will come with them," said Dawn Tibble. Michael Reed agreed: "With proposals of enormous subsidies for problematic and expensive nuclear new build - and even bigger subsidies for tidal lagoons - why not invest in our future to massively increase the use of this elegantly simple, cheap and now very reliable source of never ending energy?" he asked. "The UK’s west coast has enough onshore wind energy resource to supply its needs four times over. The best place in the whole of Europe in fact. It’s cheaper than offshore wind, it doesn’t cover up agricultural land like PV, and after 50 years of technical development [it is] a mature technology."

Tom Foreman offered another perspective. "Onshore wind doesn’t need subsidies as much as it needs planning permission which the Tory Government currently oppose although there was talk of relaxing their stance in Scotland," he said. "It’s a shame that onshore wind doesn’t get the same preferential treatment that Fracking gets where the Government can overturn local planning decisions and push planning permission through." And Jack Broughton, a regular and vocal opponent of wind energy in our discussions, offered two arguments against subsidies: "It is subsidised as over double the cost of coal fired generation... which forces electricity companies to buy or pay for the potential; and it does not cover the cost of generating plant that has to be available/used to back-up periods of low or non-generation. This is a large cost that used to be applied to unreliable generators in the CEGB days and should still apply." 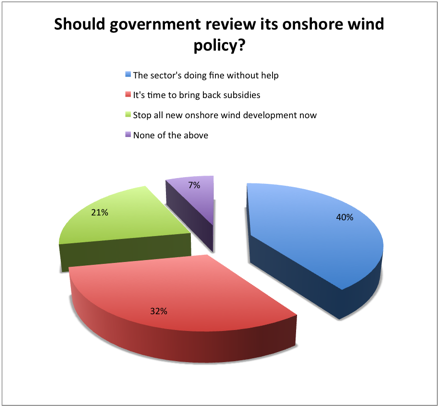