According to Ofgem, Britain has one of the most reliable gas systems in the world, with supplies coming from North Sea gas fields and from imports.

If sources of gas have been sufficient up to now – and remain so – then do we need another UK source from shale reserves?

The question to last week’s poll was predicated by Cuadrilla’s successful horizontal drilling operation at its site in Preston New Road, Lancs. Francis Egan, Cuadrilla CEO, said: ‘Natural gas will flow into this horizontal well in commercially viable quantities demonstrating that the UK’s huge shale gas resources can be safely produced and contribute to improving the UK’s energy security.’ 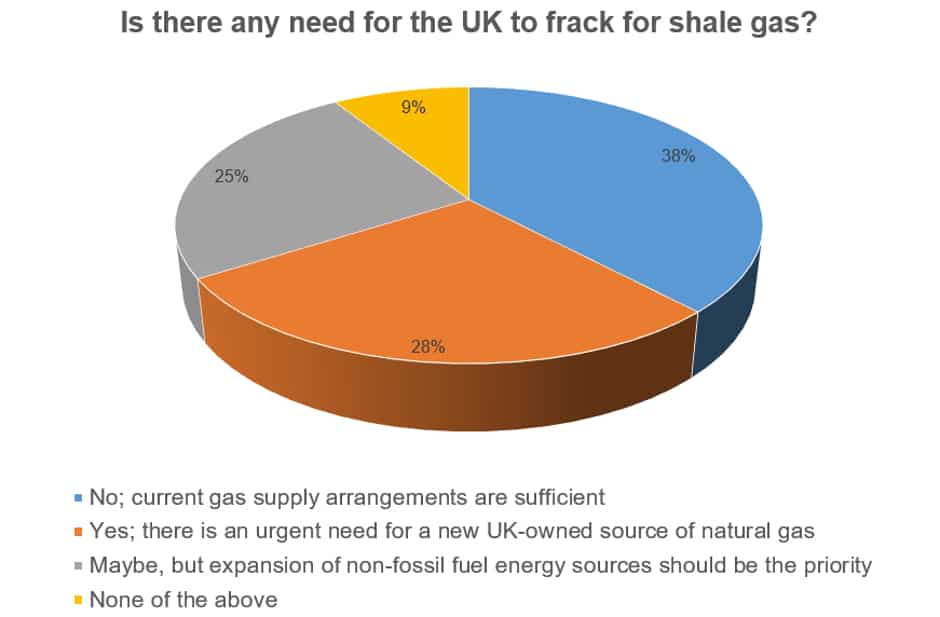 Of the 1126 respondents, 38 per cent thought that current gas supply arrangements are sufficient, followed by 28 per cent who took the opposite view and agreed that there’s an urgent need for a home grown source of natural gas.

A quarter of respondents weren’t necessarily opposed to fracking for shale gas, but thought that non-fossil fuel sources of energy should be prioritised.

The remaining nine per cent of respondents chose ‘none of the above’.

The poll has so far drawn 72 responses via Comments, including this one from Michael Morley, who said: ‘Fracking is yesterday’s news – it’s not the future. Our dependence on fossil fuels has caused almost irreparable damage to both the environment and ourselves.’

John was similarly unimpressed, stating: ‘The case for fossil fuels is now weak. Fracking has caused enormous pollution and health problems everywhere it has happened. We are in default on all current emissions levels and now need fresh impetus on renewable energy.’

Cliff Perkins added: ‘Fracking should be carefully regulated on a trial basis by government for the benefit of all and not sold-out either to commercial interests or pressure groups. A mixed source indigenous energy supply is required that will fill the gaps when the wind is not blowing and the sun not shining. The true costs, risks and benefits should be weighed.’

Taking a wider view of the poll options, David O said: ‘You could make a valid case for all of these responses. However, for me natural gas is a strategic resource and will be for the foreseeable future, therefore continuity and price stability of supply are critical to domestic and industrial sectors.’