As mankind’s latest attempt to investigate Mars was launched, we asked whether the UK was making its mark in the space sector 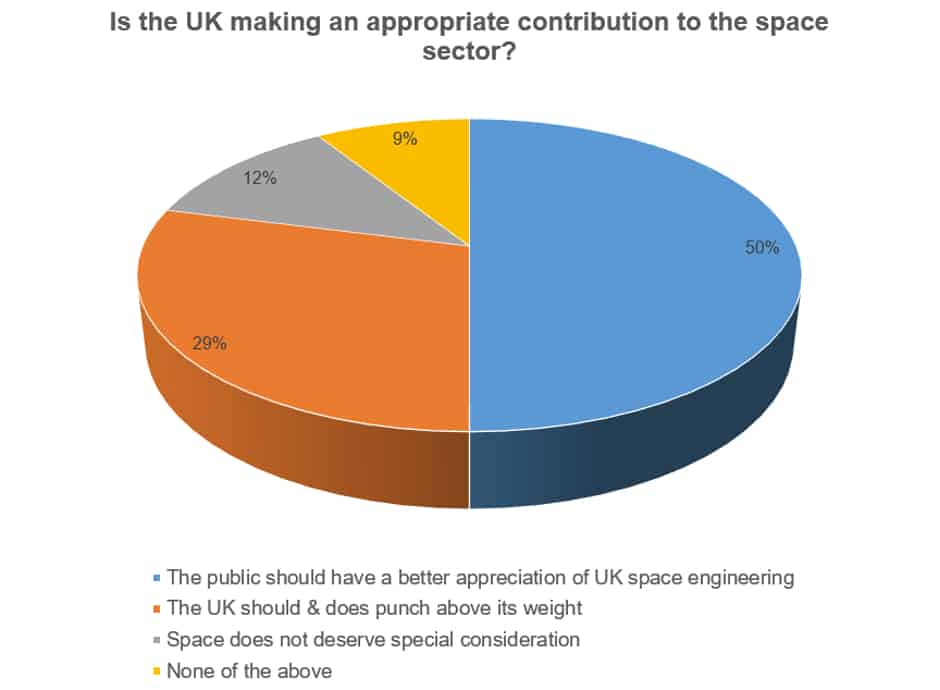 The Union flag might not appear prominently on many space missions, but British expertise plays a major role in space, with a large number of commercial communications satellites, payloads for Earth observation, planetary science and deep space discovery spacecraft and propulsion systems all being made by British experts and at UK facilities.

With this in mind, we asked our readers their thoughts about the UK in space. We received 462 responses, of which half believe that the UK public does not know or appreciate enough about the British contribution to space science. Almost a third, however, thought that the UK’s contribution outweighed what could be expected of a country and economy of this size, with 29 per cent stating that the country should and does punch above its weight in space. A further 12 per cent said that space was just one industry among many and does not deserve special consideration, while nine per cent declined to pick an option.

The comment section was lively, with 33 contributions. One voice of experience came from Another Steve, who said that he had ambitions to work in the space sector from early childhood, but had become disillusioned. “After many decades of working in the UK space sector, military and civil, I’ve been left with a deep sense of frustration and a degree of cynicism,” he said. “Every project was always a fight to get adequate funding to support real engineering whilst a substantial portion of UK funds appeared to go towards the bureaucrats in government departments. I looked with envy at my international colleagues and their generous budgets.” Reader David Anderson put it down to typical British reticence. “Is it just the British ‘way’ that we don’t blow our own trumpet. All too often credit for expertise and invention seem to go to others rather than us. We should be rightly proud of the rich engineering and technical abilities of our nation and shout them from the rooftops. As mentioned earlier this is how you get the interest of the next generation of technicians.”

Several readers mentioned the recent news that the UK may pull out of the EU’s global positioning satellite project Galileo as a result of Brexit. “However I have a deep fear that the Brexit process will wreck these great works and undo the efforts of out world class engineers and scientists,” said Michael Reid. “I applaud the government for taking action to construct a satellite system once we are shut out of the Galileo system which we contribute to, once we leave the EU,” said David Searle.

The evocatively named Evil Villain added: “Whatever space industry we have now will be decimated after we leave the EU – anything that was placed that can be pulled out is being pulled out and nothing else is going to come our way.” Another Steve thought that the Galileo issue might have a long lasting effect: “I can’t help thinking this current government fascination with the space sector will fade away as budgets increase. The recent news concerning the EU/ESA political machinations over the Galileo project may very well be the start of the inevitable decline.”

John Hartley raised an important point. “People forget that every Pound/Dollar/Euro/Rouble you spend on a space project is spent here on Earth, creating jobs, building factories/launch sites, developing new materials & technologies. The spin off benefits are huge, but completely lost on the short term mindset of HM Treasury.”

Please continue to send us your thoughts on this subject.