Last week’s poll: what is the future of Bloodhound? 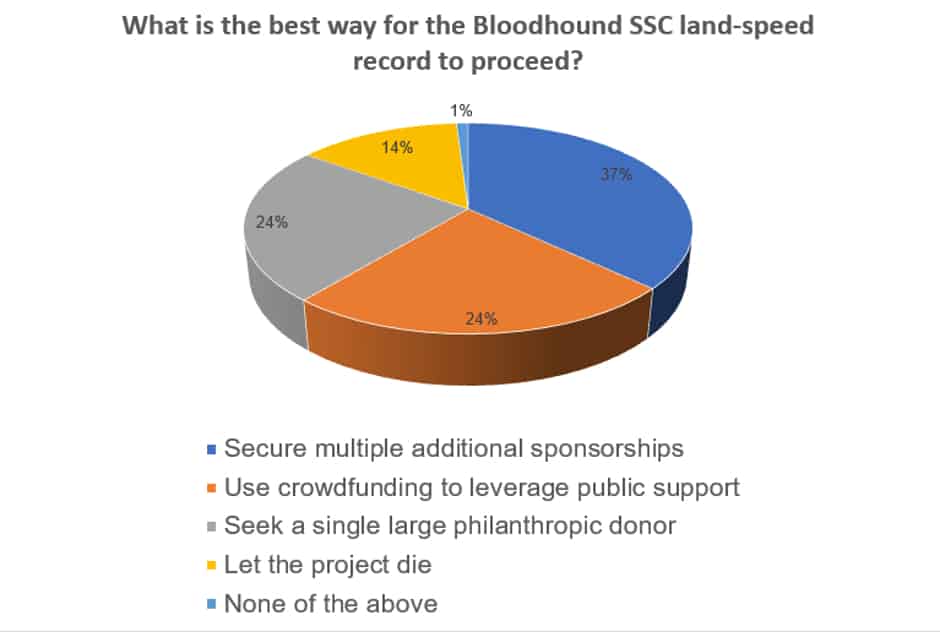 Bloodhound SSC, the project to break the world land-speed record and subsequently raise it to 1000 miles an hour, has gone into administration. Without an injection of new funding, the project will be unable to take the car to Hakskeen Pan in South Africa for its scheduled high-speed runs next year.

The project needs £25m to fund the next stages of its attempt, but what is the best way to achieve this target?

For 37 per cent of respondents to last week's poll, the £25m target could be achieved via securing multiple additional sponsorships. 48 per cent of the vote was split equally between those favouring crowdfunding and the remainder agreeing that a single large philanthropic donor could provide the funds. Of the remaining vote, 14 per cent thought the land-speed record project should cease entirely, and one per cent opted for none of the above.

Bloodhound's chief engineer Mark Chapman noted that £25m is considerably less than the funding needed for America’s Cup team or even to achieve last-place in the Formula One world championship, and comments received to date appear to echo this view.

Steve Cook said: “Have you contacted Richard Branson? He’s usually up for taking things to the next limit!”

Neil McLeod added: “I suggest one ‘philanthropic’ sponsor. Multiple sponsors is what has got the project this far, i.e. the design, development, engineering and production of the car. Much of this sponsorship has been in the form of expertise lent and time given, rather than pure cash. What’s needed now is the money to get the car (and the whole support organisation) to South Africa and do what it’s been designed to do. £25m sounds a lot – but it’s not in terms of the branding opportunity it provides.

On the theme of branding, Trevor said: “I don’t know how ‘philanthropic’ their motives might be but I’d have thought £25m was a cheap publicity deal for any of the major motor manufacturers to slap their logo on the side of the car.”

What do you think? Keep the debate alive using Comments below, but please note our guidelines for the content of comments.