The US non-profit research company, SRI International, is testing a buoy-mounted, wave-powered generator in the ocean near Santa Cruz, California.

The US non-profit research company SRI International is testing a buoy-mounted, wave-powered generator in the ocean near Santa Cruz, California.

The wave-powered generator uses SRI's Electroactive Polymer Artificial Muscle (EPAM), a rubbery material that can generate electricity by simply being stretched and allowed to return to its original shape.

This 'artificial muscle' can generate electricity directly from the motion of waves, with no need for complicated and costly hydraulic transmissions, typically found in other wave-power generators.

In 2004, the technology was licensed exclusively to Artificial Muscle, an SRI spin-off company.

A Japanese company, Hyper Drive, has licensed the technology for wave-power generator applications from Artificial Muscle, and is sponsoring the testing of the device.

An earlier version of the generator was deployed in August 2007 in Tampa Bay, Florida.

The Tampa Bay experiment used a generator design that was intended to show how the EPAM technology could supply electricity to existing buoys, such as navigation buoys, and eliminate the need to replace large numbers of costly batteries.

In an experiment this week, SRI will test a design that shows how the technology might be used on a buoy intended to harvest larger amounts of power, for use in shore industries. 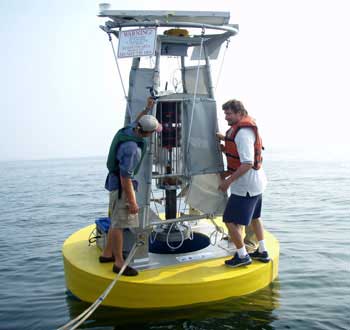 'In our first demonstration, we proved that SRI's wave-powered generator could be mounted on a typical buoy and operate in a marine environment,' said Philip von Guggenberg, director of business development at SRI International.

'For this demonstration, we will test a new design that we anticipate will produce greater amounts of energy in harbours and bays, as well as unprotected ocean waters.

'For this reason, this year's test location was selected to be off the coast of Northern California.'

Turning the tide at the European Marine Energy Centre