Lockheed Martin has tested a new pilot vision system that uses sensors to deliver a 360-degree view around the aircraft.

Known as Pilotage Distributed Aperture Sensor (PDAS), the system consists of six infrared sensors positioned around the aircraft, all linked to aircrew helmets and cockpit displays via an open-architecture processor (OAP). It is being developed specifically for vertical lift vehicles and has previously been tested on UH-60 Black Hawk helicopters. The latest tests, which took place in Fort Worth, Texas, were performed on a Bell V-280 Valor, a next-generation tiltrotor aircraft being developed by Bell and Lockheed.

"With its embedded, multi-functional sensors, PDAS is the ideal foundation for an integrated survivability suite that will enable army aircrews to own any environment and universally detect and defeat incoming threats."

While the PDAS system can only generate imagery for two users, it will ultimately support up to six, which could include pilots in other aircraft and mission commanders on the ground. Multiple users will be able to independently interact with PDAS for a variety of tasks, such as scanning an area prior to a ground operation, coordinating door-gunner and landing zone operations, managing sling loads and conducting fast-rope operations.

According to Lockheed, the OAP can also facilitate a scene and point and multi-object tracking capability, as well as search and track functions that automatically identify and track moving ground and airborne targets. There are also plans to integrate the company’s Multi-Modal Sensor Fusion (MMSF) capability, which uses algorithms to blend different types of sensor data to generate real-time 3D terrain maps around the aircraft. Lockheed claims MMSF provides enhanced situational awareness in poor visibility, even helping pilots to navigate when GPS is unavailable. 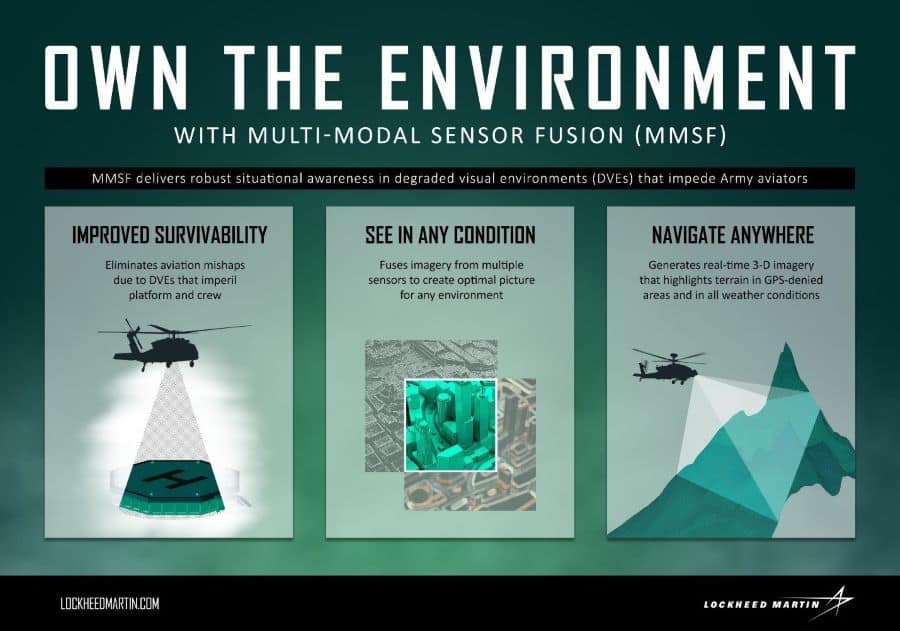