A novel haptic, or touch-based, computer interface has been developed by researchers at Carnegie Mellon University.

Computers, long used as tools to design and manipulate three-dimensional objects, may soon provide people with a way to sense the texture of those objects or feel how they fit together, thanks to a haptic, or touch-based, interface developed at Carnegie Mellon University.

Unlike most other haptic interfaces that rely on motors and mechanical linkages to provide some sense of touch or force feedback, the device developed by Ralph Hollis, research professor in Carnegie Mellon’s Robotics Institute, uses magnetic levitation and a single moving part to give users a highly realistic experience. Users can perceive textures, feel hard contacts and notice even slight changes in position while using an interface that responds rapidly to movements.

'We believe this device provides the most realistic sense of touch of any haptic interface in the world today,' said Hollis, whose research group built a working version of the device in 1997.

With the help of a $300,000 National Science Foundation grant, however, he and his colleagues have improved its performance, enhanced its ergonomics and lowered its cost. The grant also enabled them to build 10 copies, six of which are being distributed to haptic researchers across the US and Canada.

'This is an affordable device that’s also practical,' said Hollis, who has started a spinoff company to build additional devices. 'Now other people can have this technology, and this represents technology transfer in the very real sense.'

The system eliminates the bulky links, cables and general mechanical complexity of other haptic devices on the market today in favour of a single lightweight moving part that floats on magnetic fields. 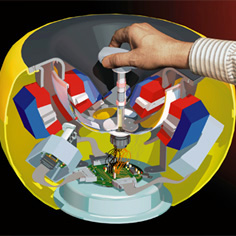 At the heart of the maglev haptic interface is a bowl-shaped device called a flotor that is embedded with six coils of wire. Electric current flowing through the coils interacts with powerful permanent magnets underneath, causing the flotor to levitate. A control handle is attached to the flotor.

As this virtual object encounters other virtual surfaces and objects, corresponding signals are transmitted to the flotor’s electrical coils, resulting in haptic feedback to the user.

Six devices will be delivered to researchers at Harvard, Stanford, Purdue and Cornell, as well as to the universities of Utah and British Columbia.

All are members of the Magnetic Levitation Haptic Consortium, an international group dedicated to fostering increased use of the technology.

To watch a movie of the haptic interface in action, click here.