US researchers have shown that graphene has a current-carrying capacity approximately a thousand times greater than copper.

Recent research into the properties of graphene nanoribbons has provided two new reasons for using the material as interconnects in future computer chips.

In widths as narrow as 16nm, graphene has a current-carrying capacity approximately a thousand times greater than copper, while providing improved thermal conductivity.

The current-carrying and heat-transfer measurements were reported by a team of researchers from the Georgia Institute of Technology.

The same team had previously reported measurements of resistivity in graphene that suggest the material's conductance would outperform that of copper in future generations of nanometre-scale interconnects.

Raghunath Murali, a senior research engineer in Georgia Tech's Nanotechnology Research Center, said: 'Graphene nanoribbons exhibit an impressive breakdown current density that is related to the resistivity. Our measurements show that these graphene nanoribbons have a current-carrying capacity at least two orders of magnitude higher than copper at these scales.'

The unique properties of graphene – which is composed of thin layers of graphite – make it attractive for a wide range of potential electronic devices.

Murali and his colleagues have been studying graphene as a potential replacement for copper in on-chip interconnects, the wires used to connect transistors and other devices on integrated circuits. Use of graphene for these interconnects, they believe, would help extend the long run of performance improvements in integrated-circuit technology.

Murali said: 'Our measurements show that graphene nanoribbons have a current-carrying capacity of more than 10^8A/cm2, while a handful of them exceed 10^9A/cm2.

'This makes them very robust in resisting electromigration and should greatly improve chip reliability.'

Because heat generation is a significant cause of device failure, the researchers also measured the ability of the graphene nanostructures to conduct heat away from devices. They found that graphene nanoribbons have a thermal conductivity of more than 1,000W/m Kelvin for structures less than 20nm wide. 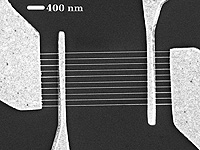