An EPSRC-sponsored project at Oxford University is providing important insights into the dynamic loads that crowds exert on grandstand structures.

Many of the spectacular new sports stadia being built in the UK and elsewhere have cantilevered upper tiers with natural frequencies as low as 4-5Hz.

Stadia are increasingly used for staging pop concerts, with the risk that crowd motions could generate unacceptable levels of vibration of the cantilever tiers, causing discomfort and/or crowd panic.

A major problem in assessing such issues is that the loads imparted by moving humans, and the factors affecting those loads, are very poorly understood. As a result, current codified design guidelines tend to be vague or very conservative.

The Oxford research team, comprising Drs Tony Blakeborough, Martin Williams and Anthony Comer, has developed a unique, instrumented, moving grandstand rig which is providing answers to many of the outstanding questions.

The rig can support up to 15 people in a realistic configuration, and provides continuous output of forces at the feet from each individual. The rig is supported on air-springs and can be driven by four electric actuators, either to provide a pre-defined input motion or enable it to respond dynamically as though it were part of a larger, flexible structure.

This latter mode of operation is achieved through a novel technique known as real-time hybrid testing, developed at Oxford. Tests are conducted in which groups are asked to jump or bob in time to a metronome beat or music. Further data are provided by analysing digital video footage of tests using video tracking techniques, so that individual head motions can be tracked and correlated with foot forces. 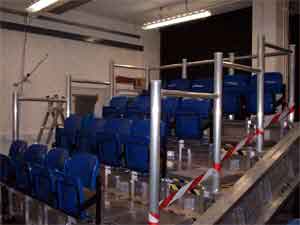 The tests are enabling the researchers to quantify important effects such as:

Early tests have indicated that visual cues significantly increase crowd synchronization, and that individual forces generated at the frequency range of interest may be as much as 70% lower than those currently recommended in design codes.

This work forms part of a larger project on grandstand dynamics and human-structure interaction, which includes numerical modelling of both structures and humans, and stochastic analysis to establish reasonable limits on structural response.