A new class of materials invented and developed by Omar Yaghi at the University of Michigan can store vast amounts of carbon dioxide.

Since the Industrial Revolution, levels of carbon dioxide - a major contributor to the greenhouse effect - have been on the rise, prompting scientists to search for ways of counteracting the trend.

One of the main strategies is removing carbon dioxide (CO2) from the flue exhaust of power plants, using porous materials that take up the gas as it travels up the flue.

A new class of materials invented and developed by Omar Yaghi at the can store vast amounts of carbon dioxide. And one member of the class has the highest carbon dioxide capacity of any porous material.

The materials, called metal-organic frameworks (MOFs) and sometimes referred to as crystal sponges, previously have been shown to have great potential for storing hydrogen and methane. On the molecular level, MOFs are scaffolds made up of metal hubs linked together with struts of organic compounds, a structure designed to maximize surface area.

By modifying the materials in various ways, Yaghi and his team have been able to increase the material's storage capacity, making it possible to stuff more gas molecules into a small area without resorting to high pressure or low temperature. 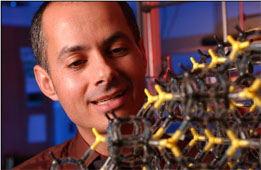 The star performer in Yaghi's cast of MOFs is one dubbed MOF-177, which sops up 140% of its weight in CO2 at room temperature and reasonable pressure (32 bar).

Put another way, "if you have a tank filled with MOFs, you can store in that tank as much carbon dioxide as would be stored in nine tanks that do not contain MOFs," Yaghi said. By comparison, a tank filled with porous carbon - one of the current state-of-the-art materials for capturing CO2 in power plant flues - would hold only four tanks worth of CO2.

The researchers say that the MOFs can be made in large quantities from low-cost ingredients, such as zinc oxide and terephthalate.

Their research was funded by the US Department of Energy and the National Science Foundation.