Researchers at the California Institute of Technology have developed a super-compact high-resolution microscope small enough to fit on a fingertip.

The 'microscopic microscope' could be used in the field to analyse blood samples for malaria or check water supplies for pathogens. Better yet, the researchers claim it could be mass-produced for as little as $10 (£5).

The new microscope, which works without using lenses, combines traditional computer-chip manufacturing technology with microfluidics - the channeling of fluid at small scales. The entire optofluidic microscope chip is about the size of a 10 pence piece, although the part of the device that images objects is smaller still.

The fabrication of the microscopic chip is disarmingly simple. A layer of metal is coated onto a grid of charge-coupled device (CCD) sensors (the same sensors that are used in digital cameras). Then, a line of tiny holes, less than one-millionth of a metre in diameter, is punched into the metal, spaced five micrometres apart. Each hole corresponds to one pixel on the sensor array.

A microfluidic channel, through which the liquid containing the sample to be analysed will flow, is added on top of the metal and sensor array. The entire chip is then illuminated from above.

When the sample is added, it flows - either by the simple force of gravity or drawn by an electric charge - horizontally across the line of holes in the metal. As cells or small organisms cross over the holes, one hole after another, the objects block the passage of light from above onto the sensor below. This produces a series of images, consisting of light and shadow, akin to the output of a pinhole camera.

Because the holes are slightly skewed, so that they create a diagonal line with respect to the direction of flow, the images overlap slightly. All of the images are then pieced together to create a surprisingly precise two-dimensional picture of the object. 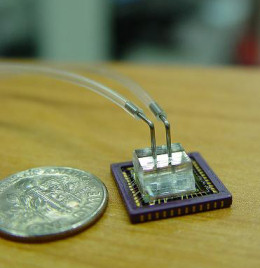 Changhuei Yang, assistant professor of electrical engineering and bioengineering at Caltech, who developed the optofluidic microscope along with his colleagues, said: 'The whole thing is truly compact - it could be put in a cell phone - and it can use just sunlight for illumination, which makes it very appealing for Third-World applications.'

Yang is now in discussions with biotech companies to mass-produce the device.