Researchers at North Carolina State University have developed a technique for creating NV-doped single-crystal nanodiamonds that could serve as components in quantum computing technologies. 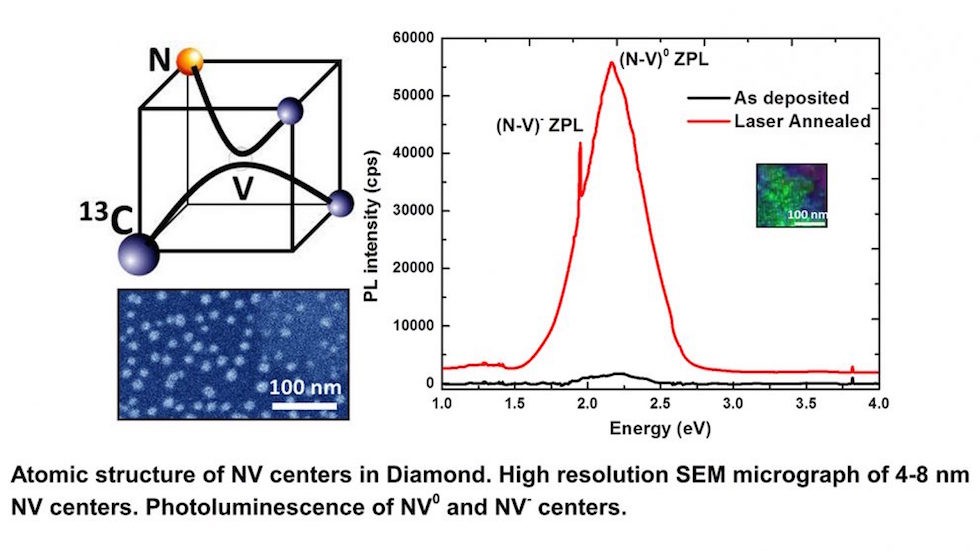 These NV (nitrogen vacancy) doped nanodiamonds, which are four to eight nanometres wide, could also find use in single-photon sensors and nontoxic, fluorescent biomarkers.

Computers currently use binary logic, in which each binary unit (bit) is in one of two states: 1 or 0. Quantum computing, which could significantly increase computing power and speed, makes use of superposition and entanglement, allowing the creation of quantum bits (qubits) which can have a vast number of possible states.

A number of options have been explored for creating quantum-computing systems, including the use of diamonds that have nitrogen-vacancy centres.

According to NC State, diamond has a very specific crystalline structure, consisting of repeated diamond tetrahedrons that contain five carbon atoms each. The NC State research team is said to have developed a new technique for creating diamond tetrahedrons that have two carbon atoms; one vacancy, where an atom is missing; one carbon-13 atom (a stable carbon isotope that has six protons and seven neutrons); and one nitrogen atom. This is called the NV centre. Each NV-doped nanodiamond contains thousands of atoms, but has only one NV centre; the remainder of the tetrahedrons in the nanodiamond are made solely of carbon.

"That little dot, the NV centre, turns the nanodiamond into a qubit," said Jay Narayan, the John C. Fan Distinguished Chair Professor of Materials Science and Engineering at NC State and lead author of a paper describing the work. "Each NV centre has two transitions: NV0 and NV-. We can go back and forth between these two states using electric current or laser. These nanodiamonds could serve as the basic building blocks of a quantum computer."

To create these NV-doped nanodiamonds, the researchers start with a substrate, such as such as sapphire, glass or a plastic polymer. The substrate is then coated with amorphous carbon - elemental carbon that, unlike graphite or diamond, does not have a regular, well-defined crystalline structure. While depositing the film of amorphous carbon, the researchers bombard it with nitrogen ions and carbon-13 ions. The carbon is then hit with a laser pulse that raises the temperature of the carbon to approximately 4,000 Kelvin (or around 3,727 degrees Celsius) and is then rapidly quenched. The operation is completed within a millionth of a second and takes place at one atmosphere - the same pressure as the surrounding air. By using different substrates and changing the duration of the laser pulse, the researchers can control how quickly the carbon cools, which allows them to create the nanodiamond structures.

"Our approach reduces impurities; controls the size of the NV-doped nanodiamond; allows us to place the nanodiamonds with a fair amount of precision; and directly incorporates carbon-13 into the material, which is necessary for creating the entanglement required in quantum computing," Narayan said in a statement. "All of the nanodiamonds are exactly aligned through the paradigm of domain matching epitaxy, which is a significant advance over existing techniques for creating NV-doped nanodiamonds."

"The new technique not only offers unprecedented control and uniformity in the NV-doped nanodiamonds, it is also less expensive than existing techniques," Narayan says. "Hopefully, this will enable significant advances in the field of quantum computing."

The researchers are currently talking with government and private sector groups about how to move forward. One area of interest is to develop a means of creating self-assembling systems that incorporate entangled NV-doped nanodiamonds for quantum computing.

The paper, "Novel synthesis and properties of pure and NV-doped nanodiamonds and other nanostructures," is published in the journal Materials Research Letters.