Manchester-based Nanoco is to design and develop quantum dots for use in light-emitting diodes in liquid-crystal-display televisions for a Japanese TV maker.

UK quantum-dot maker Nanoco Technologies has signed a joint development agreement with an unnamed Japanese electronics company under which it will design and develop quantum dots for use in light-emitting diodes (LEDs) in liquid-crystal-display (LCD) televisions.

Nanoco will receive an upfront payment and milestone payments under the terms of the agreement and, on completion of the 18-month development work, it is expected that a supply-and-licence agreement will be signed.

The structure of the agreement is similar to an earlier agreement that the company signed with another Japanese corporation active in the LCD display and general lighting markets.

The earlier agreement comprised a total of $1.2m (£731,997) in joint development payments during a 12-month period. The development work was successful and a supply-and-licence agreement followed, from which a further $8m in milestone payments is expected by 31 December 2010.

Quantum dots are tiny particles, or nanoparticles, of a semiconductor material, traditionally chalcogenides (selenides or sulphides) of metals such as cadmium or zinc (CdSe or ZnS), for example, which range from 2nm to 10nm in diameter (about the width of 50 atoms).

As a result of their small size, the dots display unique optical and electrical properties that are different in character to those of the corresponding bulk material. The most immediately apparent of these is the emission of photons under excitation, which are visible to the human eye as light. The wavelength of these photon emissions depends not on the material from which the quantum dot is made, but its size.

The ability to precisely control the size of a quantum dot enables Nanoco to determine the wavelength of the emission, which, in turn, verifies the colour of light that the human eye perceives. Quantum dots can, therefore, be 'tuned' during production to emit any colour of light desired. The ability to control - or tune the emission from the quantum dot by changing its core size - is called the 'size quantisation effect'. 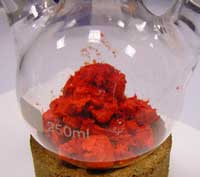 At the end of the production process, quantum dots appear physically either as a powder or in a solution. As a result of their tiny size, the ability to produce even a relatively small volume of quantum dots (one kilo, for example) will yield enough actual quantum dots for industrial-scale applications. Nanoco has patented a molecular seeding process that enables such large-scale production to occur.

The company expects to sign further agreements with companies active in the LED market in due course.