Northrop Grumman engineers have recreated a top-secret German plane that could have affected the course of World War II.

Northrop Grumman engineers have recreated a top-secret German aeroplane that could have affected the course of World War II.

In the early 1940s, an innovative aircraft design by two German brothers caught the attention of Adolf Hitler’s Third Reich, which began a secret construction project.

The Horten 229 (named for its designers, Walter and Reimar Horten) was a jet-powered fighter aircraft with a smooth contour in the shape of a flying wing.

That shape is now known to be more difficult for radar to detect than traditional configurations.

The Horten 229 was briefly flight tested but could not be deployed before the end of the war.

Since then, aviation historians have wondered how effective the futuristic design would have been against Allied early-warning radar, widely credited as a major factor in blunting Nazi air power.

So the Northrop Grumman engineers designed a full-scale model of the 55-foot flying wing and built it to the exact specifications of the original.

They then mounted the model five stories off the ground then measured its radar ‘signature’ at the company’s test range in the Mojave Desert.

German designer Reiman Horton said he mixed charcoal dust in with wood glue on the exterior of the aircraft to absorb radar waves, which could have shielded the aircraft from detection by British early-warning ground-based radar known as Chain Home.

This was tested by the Northrop-Grumman engineers and found to be successful, resulting in a radar cross-section only 40 per cent that of conventional aircraft.

The testing revealed that the aircraft, with its frontally prominent engines, would still have been detected by the Allies’ primitive radar, although its Mach 0.92 speed would have prevented any of the Allied fighters from catching it.

The museum is an affiliate of the Smithsonian Institution and it was the first aero-themed museum to be accredited by the American Association of Museums. 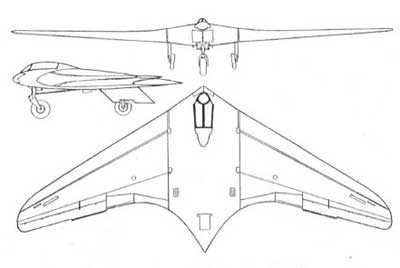 Northrop Grumman designed and produced the US Air Force B-2 stealth bomber, the smooth, flying wing-shape of which contributes to its radar-evading stealth characteristics.