The National Cyber Security Centre (NCSC) is warning people to remain vigilant in the wake of Friday’s ransomware attack, which affected thousands of computers around the world. 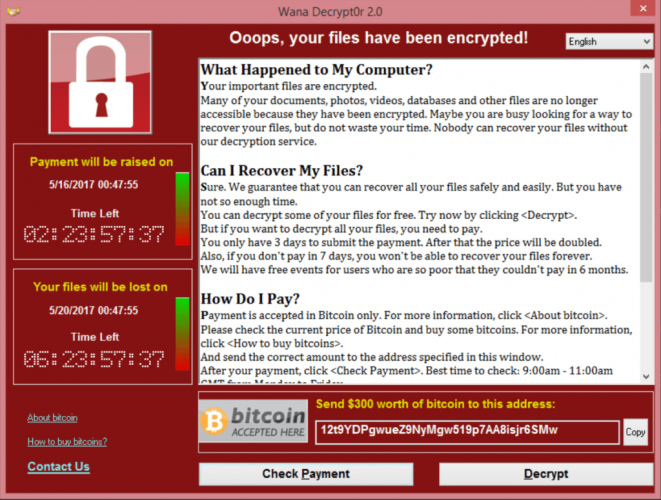 Although there are fears that a new strain of the WannaCry virus could be used to deliver another coordinated attack, the bigger threat is likely to come from machines already infected from Friday’s hack. The NHS was one of several organisations targeted, resulting in patients being turned away from A&E and operations being cancelled.

“Since the global coordinated ransomware attack on thousands of private and public sector organisations across dozens of countries on Friday, there have been no sustained new attacks of that kind,” the NCSC said in a statement.

“But it is important to understand that the way these attacks work means that compromises of machines and networks that have already occurred may not yet have been detected, and that existing infections from the malware can spread within networks. This means that as a new working week begins it is likely, in the UK and elsewhere, that further cases of ransomware may come to light, possibly at a significant scale.”

The NCSC makes three key recommendations for organisations to protect themselves from ransomware attacks:

Meanwhile, defence secretary Michael Fallon has insisted that the UK’s Trident nuclear deterrent is safe from potential hacking attempts. Speaking on the BBC’s Andrew Marr Show, Fallon said the Vanguard submarines that carry the deterrent “operate in isolation” when on patrol, implying that they can’t be hacked remotely. Questions have been raised over Trident’s vulnerability to potential cyber attacks, as the system is believed to use ageing Window’s XP software – the same operating system targeted by the global ransomware attack.

Further NCSC guidance for enterprises can be found here, while guidelines for home users and SMEs is available here.

Airbus takes charge of system to protect military against cyber-attack