Researchers at the University of Twente in the Netherlands have developed a 3d bioprinting technique to create structures with living cells.

Reported in a paper published by the American Association for the Advancement of Sciences (AAAS) the group’s so-called ‘in-air microfluidics’ technique enables rapid production of micro building blocks that could be used for repairing damaged tissue. 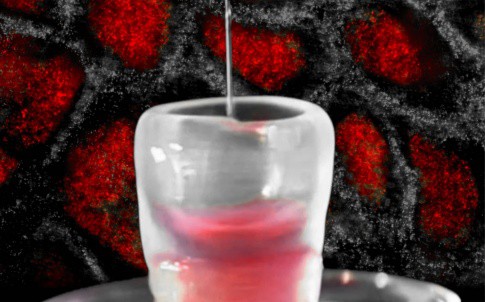 Microfluidics is typically used to refer to the chips with tiny fluidic channels used to manipulate drops of fluid with sizes between a micrometre and a millimetre.

Although these chips offer a broad range of possibilities, the speed at which droplets leave the chip is typically in the microlitre per minute range, which for clinical and industrial applications is not fast enough.

The 3d bioprinting technique offers a speedier alternative by manipulating fluids in air rather than microchannels.

The process uses two ‘jets’ of droplets, which are shot at each at speeds up to 1000 times faster than droplets from a microchip. By choosing jets containing different types of fluids that react, the 'collision' results in new materials.

In this way, it is possible to capture a living cell inside printable material. The resulting bio building blocks are printed in a 3D structure that looks like a sponge, filled with cells and fluid, and have an internal structure that is similar to that of natural tissue.

Many 3D printing techniques are based on using heat or UV light: both would damage living cells. The new microfluidic approach is therefore a promising technique in tissue engineering, in which damaged tissue is repaired by using cultured cell material of the patient.