A research team at Cambridge University have developed a new generator for the wind turbine industry.

A research team at the Department of Electrical Engineering at Cambridge University have developed a new generator for the wind turbine industry.

The Brushless Doubly-Fed Generator (BDFG) can be used in a range of wind turbines ranging from multi-megawatt systems for wind farms down to micro turbines used for domestic power generation.

Research in Cambridge on the generator was started by Prof Williamson in the 1990s and, since 1999, is being undertaken by  Dr Richard McMahon, and his team in collaboration with Durham University's head of engineering, Prof Peter Tavner. The research has recently matured, enabling practical and complete designs to be made, and a university spin-out - Wind Technologies - has been founded to exploit the technology.

To demonstrate the technology, a generator is to be installed on a 20kW turbine at or close to the department's Electrical Engineering Division Building on the west Cambridge site by early 2008.

'We are very excited about the new installation. This will be the first time BDFG is to be used commercially. The benefits to the wind power industry are clear: higher reliability, lower maintenance and lower production costs,' said Dr Ehsan Abdi, co-researcher and managing director of Wind Technologies.

'The west Cambridge medium size turbine should successfully demonstrate the applicability of the new generator, and we hope it will encourage the developers of other new construction projects to consider local wind-powered electricity generation to meet their obligations', he added..

On a larger scale, a 600kW generator built by Wind Technologies is to be tested on a DeWind turbine in Germany, starting next spring. Its planned one-year test should demonstrate the improved performance of the BDFG technology to the key players in the wind industry.

'This will put Wind Technologies in a position of strength in pursuant discussions on technology trade sale, licensing or partnering with large generator manufacturers, which is the strategy of choice for tackling this marketplace,' said Ehsan.

A contemporary Brushless Doubly-Fed Machine (BDFM) is a single frame induction machine with two three-phase stator windings of different pole numbers, and a special rotor design. Typically one stator winding is connected to the mains or grid, and hence has a fixed frequency, and the other is supplied with variable voltage at variable frequency from a converter.

In the majority (more than 90 percent) of newly-installed wind turbines in the world, generation is from a slip-ring generator. There are drawbacks to the use of slip-ring generators, particularly the additional cost and bulk of a machine which incorporates slip-rings and the need to maintain brush-gears including replacement of the brushes on a regular basis. Studies have shown that problems with brush-gear are a significant issue in wind turbine operation and reliability, and that the problem will be more severe in machines deployed offshore where there are stronger winds and accessibility is impaired. 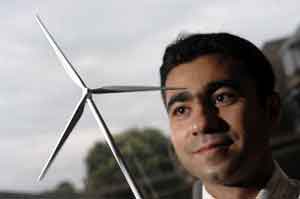 The project received the Scientific Instrument Makers Award and the Cambridge University Entrepreneurs Business Idea Award in 2004. In 2005, the Institution of Electrical Engineers, now the Institution of Engineering and Technology, added its Innovation in Engineering Award. The company has recently received grants from Cambridge University Challenge Fund and East of England Development Agency to carry out market assessment, file patents and complete the pre-production prototype.

Harnessing wind power for electricity generation is becoming ever more common, both by large-scale wind farms, and increasingly by small domestic installations, with the UK the world's leading market for micro wind generation.

'We hope that our generator, through offering high reliability and low maintenance, will significantly contribute to the wider adoption of wind power generation, particularly in offshore developments. This will lead to significant reductions in CO2 emission and further reduce our dependency on fossil fuels,' said Ehsan.

One to depend on