Border delays resulting from a no deal Brexit could cost the UK automotive sector up to £50,000 per minute, the industry’s main trade body has warned. 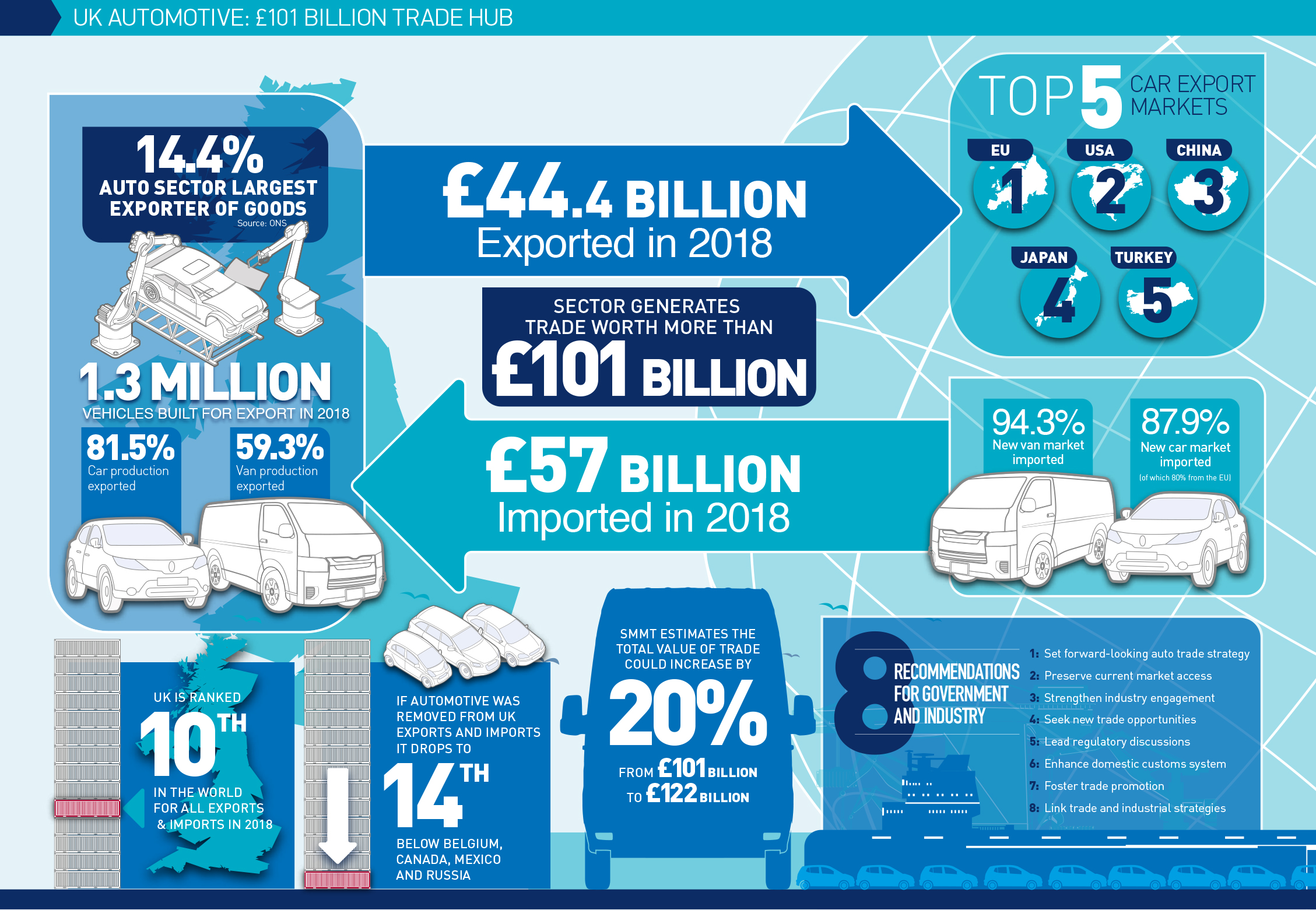 The warning is made in The Society of Motor Manufacturers and Traders (SMMT) 2019 UK Automotive Trade Report, which highlights the importance of automotive trade to the UK economy and the high stakes of a ‘no deal’ Brexit.

The report claims that an end to borderless trade could bring crippling disruptions to the industry’s just-in-time operating model. Delays to shipments of parts to production plants are measured in minutes, with every 60 seconds costing £50,000 in gross value added – amounting to some £70m a day in a worst case scenario.

SMMT adds that combined with WTO tariffs, which for trade in passenger cars alone amount to £4.5bn a year, this would deliver a knockout blow to the sector’s competitiveness, undermining a decade of extraordinary growth.

Addressing an audience of business leaders and government officials at the industry’s annual International Automotive Summit in London Mike Hawes, SMMT chief executive, said, “Automotive matters to UK trade and to the economy, and this report shows that, if the right choices are made, a bright future is possible. However, ‘no deal’ remains the clear and present danger. We are already seeing the consequences of uncertainty, the fear of no deal. The next PM’s first job in office must be to secure a deal that maintains frictionless trade because, for our industry, ‘no deal’ is not an option and we don’t have the luxury of time.”

Automotive is the UK’s single biggest exporter of goods, trading with some 160 countries worldwide, and accounting for more than 14 per cent of total exports. The sector is one of the country’s most valuable economic assets, directly employing 168,000 people and delivering an annual £18.6bn to the public purse.

Business leaders fear that leaving the EU without a deal would jeopardise this, hampering government’s ambitions to boost global exports and GDP. Without automotive, the UK would lose its hard-won status as the world’s 10th biggest exporter of goods, falling to 14th place behind Belgium, Canada, Mexico and Russia.

However, the report also calculates that the right deal, backed up by ongoing collaboration to create a competitive business environment and thriving market, and combined with an ambitious automotive-focused trade strategy, could trigger a 20 per cent uplift in the industry’s global trade value – worth £20bn, if the sector can maximise its full capacity.

SMMT’s first-ever UK Automotive Trade Report charts the rise of the sector over 40 years and sets out a series of of recommendations to government and industry to help boost competitiveness, promote frictionless trade with existing markets and unlock new business.

‘No deal’ Brexit would be catastrophic warns UK car industry