Researchers have shown that by adding a layer of nanomaterials to the bottom of a metal vessel, an order of magnitude less energy is required to bring water to boil.

Researchers at Rensselaer Polytechnic Institute have shown that by adding an invisible layer of nanomaterials to the bottom of a metal vessel, an order of magnitude less energy is required to bring water to boil.

This increase in efficiency could have a big impact on cooling computer chips, improving heat-transfer systems and reducing costs for industrial boiling applications.

'Like so many other nanotechnology and nanomaterials breakthroughs, our discovery was completely unexpected,' said Nikhil A Koratkar, associate professor in the Department of Mechanical, Aerospace, and Nuclear Engineering at Rensselaer.

'The increased boiling efficiency seems to be the result of an interesting interplay between the nanoscale and microscale surfaces of the treated metal.'

Bringing water to a boil and the related phase change that transforms the liquid into vapour requires an interface between the water and air. In the example of a pot of water, two such interfaces exist: at the top where the water meets air; and at the bottom where the water meets tiny pockets of air trapped in the microscale texture and imperfections on the surface of the pot.

Even though most of the water inside of the pot has reached 100oC and is at boiling temperature, it cannot boil because it is surrounded by other water molecules and there is no interface  (air) present to facilitate a phase change.

Bubbles are typically formed when air is trapped inside a microscale cavity on the metal surface of a vessel and vapour pressure forces the bubble to the top of the vessel. As this bubble nucleation takes place, water floods the microscale cavity, which in turn prevents any further nucleation from occurring at that specific site.

Koratkar and his team found that by depositing a layer of copper nanorods on the surface of a copper vessel, the nanoscale pockets of air trapped within the forest of nanorods 'feed' nanobubbles into the microscale cavities of the vessel surface and help to prevent them from getting flooded with water.

'By themselves, the nanoscale and microscale textures are not able to facilitate good boiling, as the nanoscale pockets are simply too small and the microscale cavities are quickly flooded by water,' Koratkar said. 'But working together, the multiscale effect allows for significantly improved boiling. We observed a 30-fold increase in active bubble nucleation site density - a fancy term for the number of bubbles created - on the surface treated with copper nanotubes, over the nontreated surface.'

This new discovery could translate into considerable efficiency gains and cost savings if incorporated into a wide range of industrial equipment that relies on boiling to create heat or steam.

The research was funded by the US National Science Foundation. 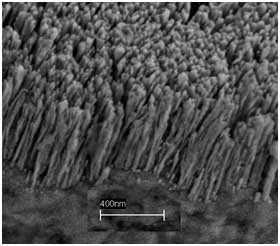 A scanning electron microscope shows copper nanorods deposited on a copper substrate. Air trapped in the forest of nanorods helps to dramatically boost the creation of bubbles and the efficiency of boiling, which in turn could lead to new ways of cooling computer chips, as well as cost savings for any number of industrial boiling applications

Nano-machines on the move