Power from the wire

Researchers at the University of Illinois have shown that a single nanowire can produce power by harvesting mechanical energy.

Made of piezoelectric material, the nanowire generates a voltage when mechanically deformed. To measure the voltage produced by such a tiny wire, however, the researchers first had to build an extremely sensitive and precise mechanical testing stage.

Min-Feng Yu, a prof of mechanical science and engineering and graduate students Zhaoyu Wang, Jie Hu, Abhijit Suryavanshi and Kyungsuk Yum synthesized the nanowire in the form of a single crystal of barium titanate, an oxide of barium and titanium used as a piezoelectric material in microphones and transducers. The wire was approximately 280 nanometers in diameter and 15 microns long.

The precision tensile mechanical testing stage is a finger-size device consisting of two coplanar platforms - one movable and one stationary - separated by a three micron gap. The movable platform is driven by a single-axis piezoelectric flexure stage with a displacement resolution better than one nanometre.

When the researchers’ piezoelectric nanowire was placed across the gap and fastened to the two platforms, the movable platform induced mechanical vibrations in the nanowire. The voltage generated by the nanowire was recorded by high-sensitivity, charge-sensing electronics. 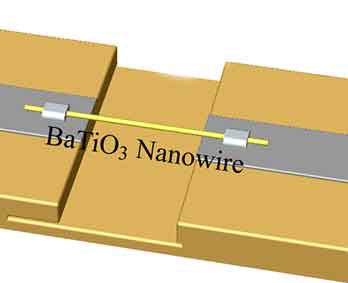 'The electrical energy produced by the nanowire for each vibrational cycle was 0.3 attojoules (less than one quintillionth of a joule),' Yu said. 'Accurate measurements this small could not be made on nanowires before.'

Robot on the wire

Down to the wire