A consortium known as Team Stellar has won first place in the UK's MoD ‘Grand Challenge’ competition for developing a number of autonomous robots.

As part of the intensive two-week contest, Team Stellar battled against 10 other competitors from across the UK to successfully tackle a series of common threats, including a roadside bomb, a marksman from a window, a group of armed military personnel and an armed vehicle with a rocket launcher.

The MoD will now consider the team’s robots for further development, potentially leading to use in real front-line combat situations by the armed forces.

Cranfield’s input into Team Stellar involved the creation of computer-based software for automatic target recognition and co-ordination of vehicle guidance and execution. 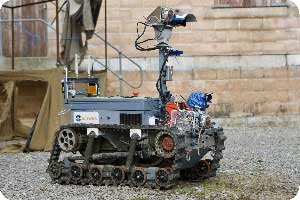 Blue Bear Systems Research designed both UAV systems and their associated control and avionics systems, and Selex Galileo were involved with overall system integration and development of the project’s ground control station.