Australia’s flagship airline Qantas has flown a Boeing 787 Dreamliner non-stop from London to Sydney as part of a new research programme.

The flight, which touched down in Sydney after 19 hours 19 minutes, is part of the airline's Project Sunrise, which is pushing the limits of ultra long haul passenger flight in an effort to open up new direct routes. Last month saw Qantas fly non-stop from New York to Sydney in 19 hours 16 minutes. The third and final research fight will be from Sydney to New York in December. Project Sunrise is part of the buildup to Qantas’ centenary, which takes place in 2020.

“Qantas is a national icon because it’s been such a big part of Australian life for so long,” said Qantas chairman, Richard Goyder.

“We started in outback Queensland carrying mail and a few passengers in the 1920s. We grew as Australia grew, and we’ve had important support roles during wars, national disasters and celebrations. Our founders talked about overcoming the tyranny of distance and through the years we’ve moved from bi-planes, to single wing, to jets to help bring things closer.”

The flight was operated by a brand new Boeing 787-9 named Longreach, re-routed via London from Boeing’s Seattle factory in order to complete the research flight. According to the airline, the direct London-Sydney route reduced total travel time by around two hours compared with current one-stop services to the east coast of Australia.

It is only the second time any commercial airline has flown this route non-stop, after Qantas flew a near-empty 747-400 in 1989. That flight had a take-off weight of 384 tonnes, including 23 people and almost 184 tonnes of fuel. By comparison, the 2019 flight had a take-off weight of 254 tonnes, with 52 people on board and just over 100 tonnes of fuel. When it touched down in Sydney it had 6,300kg of fuel remaining, enough for about another 1 hour 45 minutes of flight. 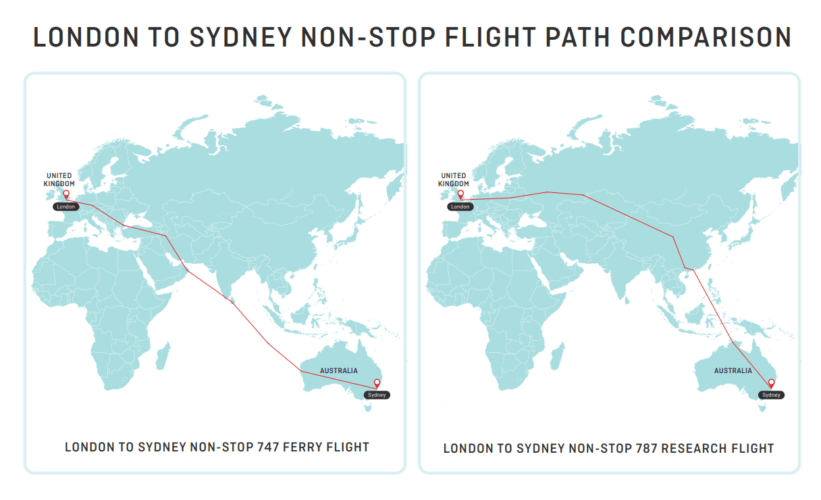 As well as pushing the boundaries of its aircraft, Qantas is using Project Sunrise to optimise its in-flight cabin programme, in an effort to reduce jetlag and make the journeys as comfortable as possible for passengers. Speaking after the New York-Sydney flight in October, CEO Alan Joyce explained some the measures Qantas was taking on these pioneering flights.

“Night flights usually start with dinner and then lights off. For this flight, we started with lunch and kept the lights on for the first six hours, to match the time of day at our destination. It means you start reducing the jetlag straight away,” said Joyce.

“We know ultra long haul flights pose some extra challenges but that’s been true every time technology has allowed us to fly further. The research we’re doing should give us better strategies for improving comfort and wellbeing along the way.”