Reaction Engines, IP Group and the Science and Technology Facilities Council (STFC) are teaming up to create a new decarbonisation technology company.

Announced at COP26, the joint venture will aim to design and bring to market lightweight and compact ammonia cracker reactors for use in hard to decarbonise sectors such as aviation and marine shipping.

The reactor will catalytically ‘crack’ the ammonia into an easy to combust fuel for gas turbines and internal combustion engines, aiming to enable the use of ammonia as a zero-carbon fuel for use in transport applications.

Ammonia is widely transported and stored globally, has a higher volumetric energy density than hydrogen and can be used alongside hydrogen as a zero-carbon replacement for other carbon-based fuels.

The cracking process involves conversion of fuels and chemicals to their component parts, turning ammonia (NH3) to three parts hydrogen (H2) and one part nitrogen (N2).

Reaction Engines described green ammonia as an ‘essential component’ of a net-zero economy, with potential to replace existing fuels without needing to redesign vehicles if partially converted to hydrogen. According to the company, its crackers enable production of a fuel that ‘closely mimics jet-fuel, but without the CO2 emissions’.

The companies believe the technology will also provide a decarbonisation solution for power generation, particularly in ‘stranded grids’ or ‘off grid’ applications. 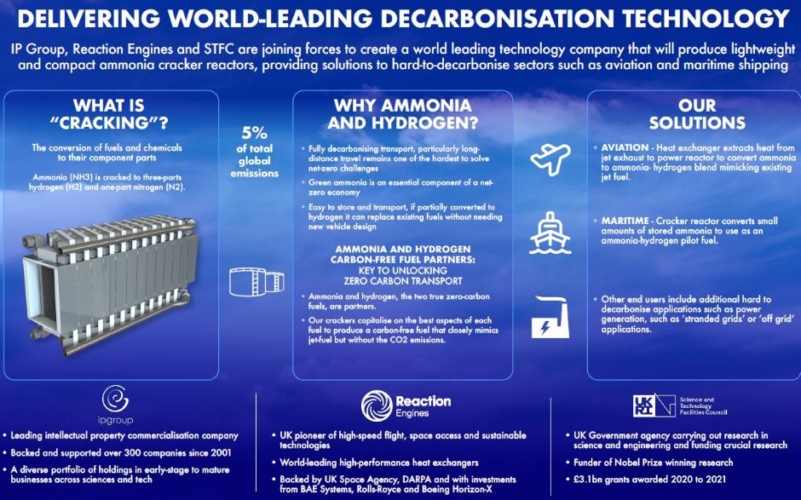 Reaction Engines’ heat exchanger technology — developed for its SABRE engine and currently being used in other technology applications — will be combined with STFC’s specialist knowledge of developing ammonia catalyst technology. IP Group will provide funding and venture-building expertise.

“I am thrilled to see the hard work we’ve been undertaking with our partners at STFC culminate in the formation of a new joint venture to bring to market decarbonisation technology solutions,” said Dr James Barth, ammonia programme lead at Reaction Engines.

“Having IP Group’s backing for Reaction Engines’ first commercial spin-out is a huge vote of confidence in the compact, lightweight ammonia reactor technology we are developing.”