Researchers at the Massachusetts Institute of Technology are working on a retinal implant that could one day help blind people regain a useful level of vision.

Researchers at the Massachusetts Institute of Technology (MIT), led by electrical engineering professor John Wyatt, are working on a retinal implant that could one day help blind people regain a useful level of vision.

The eye implant is designed for people who have lost their vision from retinitis pigmentosa or age-related macular degeneration, two of the leading causes of blindness. The retinal prosthesis would take over the function of lost retinal cells by electrically stimulating the nerve cells that normally carry visual input from the retina to the brain.

Such a chip would not restore normal vision, but it could help blind people more easily navigate their way round a room or walk down a street.

The research team, which includes scientists, engineers and ophthalmologists from the Massachusetts Eye and Ear Infirmary, the Boston VA Medical Center and Cornell as well as MIT, has been working on the retinal implant for 20 years. Recently, however, the team reported a new prototype that they hope to start testing in blind patients within the next three years.

Patients receiving the implant would wear a pair of glasses with a camera that sends images to a microchip attached to the eyeball. The glasses also contain a coil that wirelessly transmits power to receiving coils surrounding the eyeball.

When the microchip receives visual information, it activates electrodes that stimulate nerve cells in the areas of the retina corresponding to the features of the visual scene. The electrodes directly activate optical nerves that carry signals to the brain, bypassing the damaged layers of retina.

One of the biggest challenges that the researchers face is designing a surgical procedure and implant that will not damage the eye. In their initial prototypes, the electrodes were attached directly atop the retina from inside the eye, which carries more risk of damaging the delicate retina. In the latest version, the implant is attached to the outside of the eye and the electrodes are implanted behind the retina.

That subretinal location, which reduces the risk of tearing the retina and requires a less invasive surgical procedure, is one of the key differences between the MIT implant and retinal prostheses being developed by other research groups.

Another feature of the new MIT prototype is that the chip is now contained in a hermetically sealed titanium case. Previous versions were encased in silicone, which would eventually allow water to seep in and damage the circuitry.

While they have not yet begun any long-term tests on humans, the researchers have tested the device in Yucatan miniature pigs, which have roughly the same size eyeballs as humans. Those tests are only meant to determine whether the implants remain functional and safe and not to observe whether the pigs respond to stimuli to their optic nerves.

So far, the prototypes have been successfully implanted in pigs for up to 10 months, but further safety refinements need to be made before clinical trials in humans can begin. 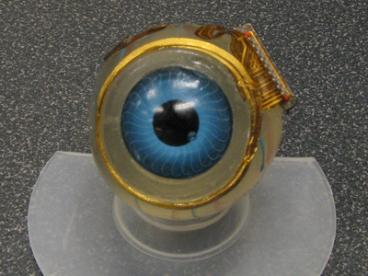 A model of the retinal implant: The coil that surrounds the iris receives visual data from a camera mounted on a pair of glasses. The coil sends the images to a chip attached to the side of the eyeball, which processes the data and sends it to electrodes implanted below the retina. Courtesy: Shawn Kelly