The DEM will give the Australian Bureau of Meteorology a reliable definition of stream networks and catchment boundaries needed to calculate water movement through the landscape.

Based on the Shuttle Radar Topographic Mission (SRTM) data collected by NASA during a Space Shuttle mission in 2000, the new one-second (~30m resolution) DEM is a vast improvement on the previous nine-second (~250m resolution) version.

The SRTM data has been available since 2005, but its use was limited by reflections from areas of dense vegetation cover, which misrepresented the pathways for water flow in the landscape.

Gallant said: 'This masked the detail in low-relief landscapes where most of Australia’s farming takes place so it was our mission to clean up the data and reveal the hidden picture.'

It has taken more than three years to develop the methods to remove the vegetation and other contaminating signals in the data.

The first phase of removing unwanted signals is now complete and the data set will be delivered by CSIRO and collaborators, Geoscience Australia and the Australian National University, to the Defence Imagery and Geospatial Organisation.

This data will be useful for a variety of applications including correcting remote-sensed imagery, calculating coverage of mobile phone towers and rendering three-dimensional visualisations of the Australian landscape.

The final phases in building the one-second DEM will occur over the next year with the removal of vegetation effects and inclusion of Australia’s river network.

The data will be licensed and managed by Geoscience Australia.

It will be available to all tiers of Australian government who can release it to their authorised contractors and collaborators.

A three-second version (~90m) of the DEM will be available for public use. 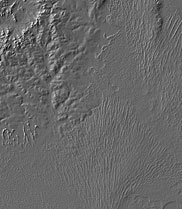