An engineer and an ecologist at Michigan State University are developing robots that swim like fish to probe underwater environments.

An engineer and an ecologist at Michigan State University (MSU) are developing robots that swim like fish to probe underwater environments.

'With these patrolling fish we will be able to obtain information at an unprecedented spatial and temporal resolution. Such data are essential for researchers to have a more complete picture of what is happening under the surface as climate change and other outside forces disrupt the freshwater ecosystems. It will bring environmental monitoring to a whole new level,' explained Elena Litchman, an assistant professor of zoology based at MSU’s Kellogg Biological Station on Gull Lake in Kalamazoo County.

The robotic fish will carry sensors recording such things as temperature, dissolved oxygen, pollutants and harmful algae. Xiaobo Tan, an assistant professor of electrical and computer engineering at MSU, is also developing electronics so the devices can navigate and communicate in their watery environment.

'We are designing the fish to be inexpensive so they can be used in various applications such as sampling water quality in lakes, monitoring aqua farms and safeguarding water reservoirs,' said Tan.

To mimic how fish swim and manoeuvre, Tan builds 'fins' for the robotic fish with electro-active polymers that use electricity to change shape. Similar to real muscle tissue, ion movements twist and bend the polymer when voltage is applied. 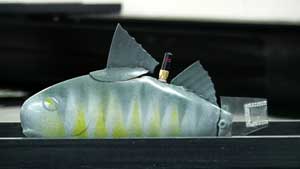 The robots will communicate wirelessly with a docking station after surfacing at programmed intervals and could be linked to other robotic fish for coordinated manoeuvres. Global positioning system technology and inertial measurement units will allow precise navigation.

A 9in prototype now swimming in Tan’s laboratory tank is modelled on the yellow perch. The device isn’t strong enough to resist stiff currents, so for now must be confined to relatively still waters. Future versions will incorporate the ability to change buoyancy to assist locomotion and manoeuvrability.

Robot fish work together to detect and analyse pollution

Autonomous soft-robot is as swift as a fish