'Terahertz imaging and sensing is a very promising but relatively new technology that requires compact, portable and tuneable sources. Our devices are an important first step in this direction,' said Federico Capasso, a senior research fellow in electrical engineering at Harvard.

'We believe our laser has great development potential because the nanoscale material used was grown by molecular beam epitaxy, a commercial and widely used thin film growth technique.'

Using lasers in the Terahertz spectral range, which covers wavelengths from 30 to 300µm, has presented a major hurdle to engineers. In particular, making electrically pumped room-temperature and thermoelectrically-cooled Terahertz semiconductor lasers has been a major challenge. These devices have, in the past, required cryogenic cooling, greatly limiting their use.

'By contrast, our device emits T-rays with several hundreds of nanowatts of power at room temperature and dissipates microwatts of power so it can be cooled by a thermoelectric cooler,' said Mikhail Belkin, a Professor of Applied Physics at Harvard. 'Further, there is the potential of increasing the terahertz output power to milliwatt levels.' 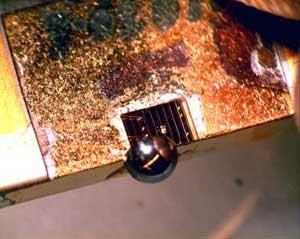