Researchers at Harvard University have used rotational 3D printing to create structural materials that are optimised for strength, stiffness, and damage tolerance. 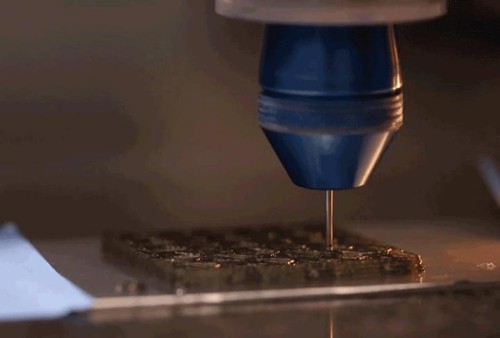 The team at the Harvard John A Paulson School of Engineering and Applied Sciences (SEAS) has shown that their method yields unprecedented control of the arrangement of short fibres embedded in polymer matrices.

According to Harvard University, the modular nature of the ink designs means that many different filler and matrix combinations can be implemented to tailor electrical, optical, or thermal properties of the printed objects.

"Being able to locally control fibre orientation within engineered composites has been a grand challenge," said the study's senior author, Jennifer A Lewis, Hansjorg Wyss Professor of Biologically Inspired Engineering at Harvard SEAS. "We can now pattern materials in a hierarchical manner, akin to the way that nature builds."

The work, described in PNAS, was carried out in the Lewis lab at Harvard. Collaborators included former postdoctoral fellows Brett Compton, now Assistant Professor in Mechanical Engineering at the University of Tennessee, Knoxville, and Jordan Raney, who is an Assistant Professor of Mechanical Engineering and Applied Mechanics at the University of Pennsylvania; and visiting PhD student Jochen Mueller from ETH Zurich.

The key to their approach is to precisely choreograph the speed and rotation of a 3D printer nozzle to program the arrangement of embedded fibres in polymer matrices. This is achieved by equipping a rotational printhead system with a stepper motor to guide the angular velocity of the rotating nozzle as the ink is extruded.

"Rotational 3D printing can be used to achieve optimal, or near optimal, fibre arrangements at every location in the printed part, resulting in higher strength and stiffness with less material," Compton said in a statement. "Rather than using magnetic or electric fields to orient fibres, we control the flow of the viscous ink itself to impart the desired fibre orientation."

It is claimed the team's nozzle concept could be used on any material extrusion printing method, from fused filament fabrication, to direct ink writing, to large-scale thermoplastic additive manufacturing, and with any filler material, from carbon and glass fibres to metallic or ceramic whiskers and platelets.

The technique reportedly allows for the 3D printing of engineered materials that can be spatially programmed to achieve specific performance goals; the orientation of the fibres can be locally optimised to increase the damage tolerance at locations that would be expected to undergo the highest stress during loading, hardening potential failure points.

"One of the exciting things about this work is that it offers a new avenue to produce complex microstructures, and to controllably vary the microstructure from region to region," Raney said. "More control over structure means more control over the resulting properties, which vastly expands the design space that can be exploited to optimise properties further."

Project aims to expand range of materials for 3D printing