A computer model enables a drop test of a product to be simulated at the prototyping stage.

Before an iron can be put on the market, the manufacturer has to carry out extensive tests to ensure its safety.

Every prototype developed has to survive a fall from a height of one metre onto a slab of wood in the laboratory without compromising the safety of the appliance.

In a joint venture with a manufacturer of household  appliances, researchers at the Fraunhofer Institute for Structural Durability and System Reliability have developed a computer model that enables this drop test to be simulated at the prototyping stage - long before the first prototype has been built.

To test whether the virtual drop test produces the same results as the actual test, the engineers investigated the dynamic processes that take place inside an iron when it falls off an ironing board. 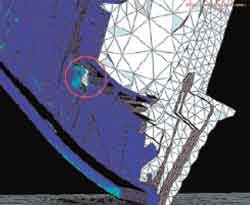 Their study proved that cracks appeared in the same place in both the real and simulated drop tests - namely between the back cover and the water tank.

This meant that the engineers were able to optimise the complex injection-moulded shape specifically by redesigning the cover instead of the tank, improving the safety of the iron.