Researchers at Tulane University have designed SafeSnip, an inexpensive device that could prevent millions of infection-related neonatal deaths in developing countries.

Researchers at ,  have designed an inexpensive device that could prevent millions of infection-related neonatal deaths in developing countries.

The small plastic clamp, called SafeSnip, cuts, seals and disinfects an umbilical cord in one step.

The device, which was developed by a Tulane University professor and bioengineering graduates, could be particularly useful in regions such as south-east Asia and Africa, where home births are common and infants are susceptible to infections caused by unsanitary birth conditions.

'You take the umbilical cord in one hand and just clamp down on it,' said William Kethman, who applied for a patent on the device with fellow graduates Bryan Molter, Stephanie Roberts and Mark Young, as well as David Rice, associate professor of biomedical engineering.

After the cord is severed, SafeSnip breaks in two, leaving one half of the device firmly clamped onto the baby’s umbilical cord to seal the wound while the other is discarded.

The researchers hope to start field-testing the device once the patent is approved.

The patenting process could last a few years, Rice said.

He and his former students have reached out to companies to see if they would be interested in mass-producing the device for further testing. 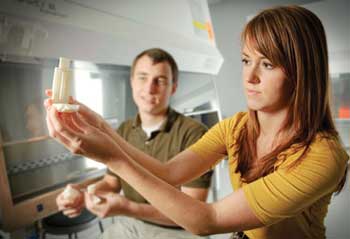 A team of bioengineers has developed the SafeSnip device, which could help save lives in regions where home births are common and infants are susceptible to infections caused by unsanitary conditions