An automated production systems designer has contained costs and enhanced reliability on his latest machine by using one of the key components to perform not one, but two critical functions.

Bob Jepp, founder and managing director of Robotix in Rugby has developed a high speed production line for scribing traceability serial numbers onto wheel rims for earthmoving equipment. This uses a single Hoerbiger-Origa rodless pneumatic cylinder in the dual critical roles of positioning the scribing head and holding the rim steady in the workstation.

In use, wheel rims, which can vary in size from 24in dia and 15in wide to 40in by 40in, are delivered by a conveyor to the scribing workstation, where V-shaped guides position them accurately.

A rodless cylinder mounted above the workstation descents, positions the scribing head just above the top surface of the rim to an accuracy of 0.01mm. Mounted on the cylinder and protruding beneath it is a pair of Hoerbiger-Origa's linear shock absorbers - these contact the rim with sufficient force to hold the rim steady during scribing.

'We've used a 50mm bore cylinder which has enough power to hold the rim firmly in place,' explained Jepp. 'The shock absorbers are there to prevent the cylinder from damaging the rims, and vice versa. They have to be stiff ones to transfer the holding force, and this means they will be reliable in the field too.

'The cylinder has, at 1000m, a relatively long stroke. This is to allow ease of access to the workstation by operators and maintenance engineers. It is fitted with one of Hoerbiger-Origa's Starline Guides to ensure smooth and accurate motion in this arduous application.' 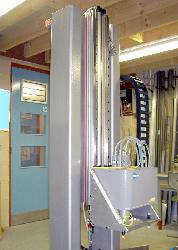 The actions of the cylinder and other parts of the machine are controlled by a Mitsubishi PLC, the LCD display of which provides the operator with process and production messages.

The scribing head is a proprietary system from Technifor in Germany that uses a micro-percussion scribing drive and x-y configured servos for letter/numeral forming.

The scribing is fairly deep so that it can be easily read even in muddy working conditions, which means there are high forces being transmitted through the rims during scribing - hence Jepp's decision to use one of Hoerbiger-Origa's larger bore cylinders.

Numbers add up for hydrogen