Sensors attached to the heads of elephant seals are helping researchers collect otherwise inaccessible information about the climate.

Data logging devices attached to the heads of elephant seals are helping researchers collect otherwise inaccessible information about the climate.

The instrumentation group at St Andrews University's Sea Mammal Research Unit created the small data logging devices that can measure the physical properties of the ocean through which the seals swim.

Prof Mike Fedak from the University's Gatty Marine Laboratory said: 'The Southern Ocean is a hotspot for climate research because its circulation is critical to understanding the earth's climate and its huge ice sheet is sensitive to climate change.

'Southern elephant seals are wide-ranging predators that roam all over the Southern Ocean, even under the sea ice in the winter - a time when conventional ocean observation methods are unable to gather data.'

Sensors attached to the seals measure temperature, pressure, and salinity. The information is then transmitted to satellites when the seals surface, together with the location of the seal. From this, researchers are able to amass data for a vast range of previously inaccessible ocean, including areas deep within the sea-ice in winter while also learning more about the animals' behaviour.

This new data has enabled them to follow the yearly rise-and-fall cycle of sea ice production, and should help scientists refine computer models of the Southern Ocean circulation. The only remaining area with limited coverage is the Pacific sector which contains no islands for the seals to breed on. 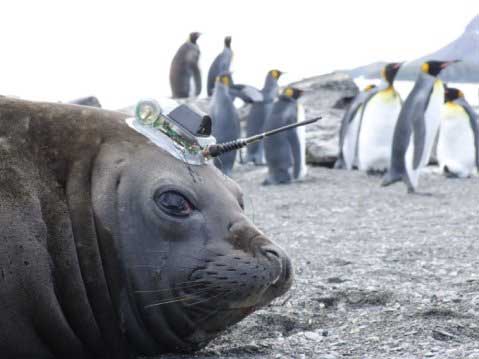 The ongoing Marine Mammals Exploring the Oceans Pole to Pole (MEOP) project the scientists are involved in has already seen 100 seals of three polar species equipped with the oceanographic sensors and these animals are now routinely sending large quantities of near real-time information from the undersampled polar regions.

The data are automatically distributed all over the world via the World Meteorological Organisation (WMO) Global Telecommunication System (GTS) to operational forecasting centres where they can be assimilated into models that are run to provide ocean forecasts and long-range seasonal and climate predictions.